Close the Camps NYC Coalition Protest Rally and March, Calling for Immediate Action to Stop ICE in our City, and to Close Trump Concentration Camps

New York, NY — Hundreds of New Yorkers joined the Close the Camps NYC coalition at Madison square on August 10, 2019 for a rally and march to fight for immigration justice, call for an end to the concentration camps being used to house migrants, and take direct action against immigration raids in NYC.

About a hundred demonstrators were arrested on disorderly conduct charges after blocking the West Side Highway during the march.

to fight for immigration justice, call for an end to the concentration camps being used to house migrants, and take direct action against immigration raids in NYC.

The protest DEMANDS an end to all detention and separation of families at the border and everywhere. We DEMAND dignity, respect, and permanent protection for all undocumented immigrants. This is a moment of life or death. There are no sidelines. The time to fight back is now.

“We are demanding an immediate halt to all ICE actions. Our elected officials needs to close the concentration camps and defund ICE. Private companies need to stop cooperating with ICE. It’s time to Abolish ICE,” said Teresa Shen, an organizer with Cosecha NYC and an organizer with Close the Camps NYC.

The action will start with a rally at Madison Square Park at 11am. Speakers and performers will include representatives from Left Voice, Earth Strike, Resistance Company, Outlive Them, XR, Movimiento Cosecha, and Cosecha NYC.

We will also read the names of those who died in immigration detention this year, and recognize those living with HIV/AIDS who passed away from medical neglect.

At noon, the coalition will march to an undisclosed location to take direct action against ICE operations in New York City. “We are committed to taking action to protect our communities, and prevent any additional raids from ICE. We are building a mass movement to shut down ICE,” said Andy Ratto, a member of Rise and Resist, and an organizer with Close the Camps NYC.

On August 10th, the Close the Camps coalition revealed a website and petition in coordination with the campaign being launched at the protest. 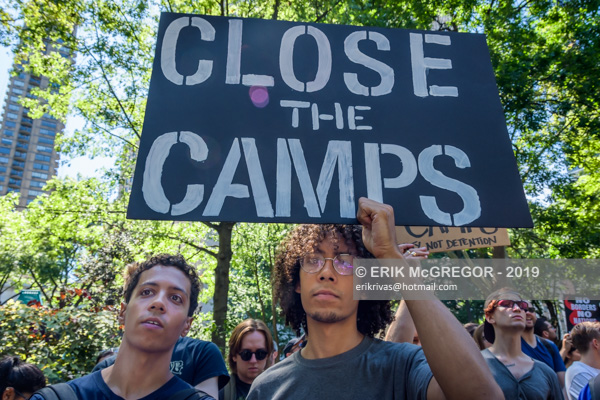