Rockaway, NY – Constituents of Congressman Gregory Meeks showed up at his Rockaway offices on July 2, 2019 to demand the closure of inhumane child Detention centers in the #CloseTheCamps Protest as part of a national day of action in response to the inhumane conditions in Trump’s detention centers.

Participants read testimonies from people held at the camps to Meeks’ staff, followed by a written statement from the Congressman.

A coalition of advocates, organizers, and activists held similar protests across the country to demand the closure of inhumane immigrant detention centers that subject children and families to horrific conditions.

Protesters assembled at Congressman Gregory Meeks’ Rockaway district offices and called on him and his fellow members or Congress to close the camps, refuse to authorize any more funding for family detention and deportation, and to visit detention camps to bear witness to the atrocities being committed.

These conditions are the product of a cruel and intentional strategy by the Trump administration to terrorize immigrant communities criminalize immigration and dismantle our asylum laws.

From imprisoning children in inhumane detention centers, threatening widespread raids to break up families, and covering up reports of migrants dying in U.S. custody, we must come together to permanently end family detention and separation, ensure all families are reunited, and close the camps.

Children denied soap and toothbrushes, crowded into unsafe conditions. Separated from their families, subject to cruel treatment that leads to lasting traumas. And some dying in custody—or dying with parents as they cross the Rio Grande.

We’ve seen the images and heard the stories coming out of child detention centers. Horrifically, these conditions aren’t an accident. They are the byproduct of an intentional strategy by the

Trump administration to terrorize immigrant communities and criminalize immigration—from imprisoning children in inhumane conditions to threatening widespread raids to break up families to covering up reports of immigrants dying in U.S. custody and abuses by ICE and CBP agents.

It’s going to take all of us to close the camps. On July 2, while members of Congress are home for the Fourth of July holiday, we will gather at their local offices in protest. Our demands: 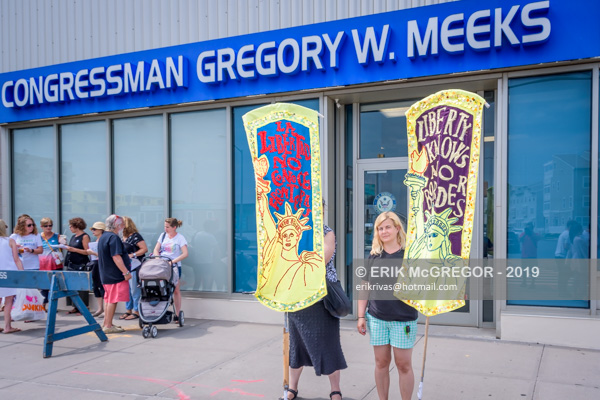