New York, NY – On May 25, 2022 more than 100 New Yorkers on the frontlines of the climate crisis, including faith leaders and youth, held a protest outside BlackRock Headquarters in Manhattan, where their annual shareholders’ meeting took place.

Participants and speakers at this event demanded that BlackRock exclude companies expanding fossil fuel production from its active and passive funds.

This morning, coinciding with BlackRock’s shareholder

meeting, nearly 100 New Yorkers on the frontlines of the climate crisis, including faith leaders and youth, protested outside BlackRock’s Manhattan headquarters. They demanded that BlackRock exclude companies expanding fossil fuel production from its active and passive funds.

Scientists have made it abundantly clear: fossil fuel expansion is incompatible with our efforts to limit global warming to 1.5 degrees.

IEA Net Zero by 2050 Analysis states “There is no need for investment in new fossil fuel supply in our net zero pathway.”

BlackRock just stated that it won’t support resolutions asking companies like banks and insurance companies to align their business with a 1.5 degree pathway:

● These resolutions would have been a crucial step in ensuring that financial institutions stop funding fossil fuel expansion.
● BlackRock itself announced that it will likely support less climate shareholder proposals than in 2021.

● BlackRock is a leading investor in the world’s heavy emitters, including in companies expanding their coal, oil, and gas production, such as ExxonMobil, Petrobras and Glencore
● In late 2021, just weeks after CEO Larry Fink’s appearance at the global climate summit COP26, it became public that BlackRock arranged a $15 billion dollar deal for Saudi Aramco’s gas pipeline subsidiary. Fossil gas consists mainly of methane, a greenhouse gas that — over the first 20 years of being in the atmosphere — has an 80 times higher global warming potential than CO2.
● BlackRock has recently been identified as one of the biggest investors in the coal, oil, and gas companies that helped fuel Russia’s war on Ukraine.
● New research by the organisations behind the Global Coal Exit List finds that BlackRock is the world’s leading investor in coal companies with investments totalling $109
billion, a whopping $34 billion of which are invested in companies planning to expand their coal business.

For the past few years, BlackRock has been making slow but critical progress on taking accountability for its role in the climate crisis, thanks to the steadfast efforts of advocates like you urging the firm to do better.

Because of this progress, BlackRock is now facing backlash from the fossil fuel industry and seems to be backsliding on key climate commitments and rhetoric.

Despite previously claiming to put sustainability at the center of all business decisions more than two years ago, the firm is still funding new fossil fuel expansion projects and continues to invest heavily in oil and gas companies. 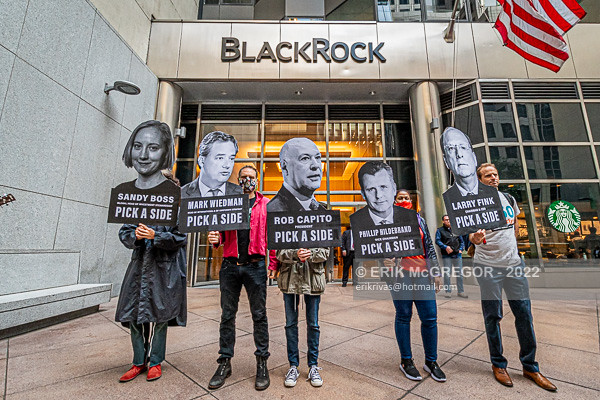