NEW YORK, NY — Civil rights and racial justice leaders held a live and digital rally on Juneteenth at Rikers Island, calling on elected leaders to complete the work of securing freedom for all, by ending the mass criminalization of Black people. Holding a banner reading “COVID BEHIND BARS = DEATH”, calling on Governor Cuomo to halt the harmful expansions of pre-trial detention set to take effect July 3rd, and to urgently pass Less is More NY legislation to overall parole supervision.

Currently, over 3,200 people are held on Rikers Island while awaiting trial, and over 500 people are awaiting hearings for alleged violations of parole supervision guidelines. 88% of people held on Rikers are Black or Latinx. Speakers will also call upon all elected letters who have supported the calls to defund police to also support immediate and significant divestment from the Department of Correction, in order to shift those resources to meet urgent community needs.

The Department currently employs over 5,000 excess officers at an annual cost of more than $1 billion, and a federal Monitor recently reported that the excess of officers contributes to more aggressive responses to incidents that arise in the jails. The Monitor’s report confirmed what incarcerated people already know – racist violence from police that is sparking protests worldwide also happens inside jails and prisons on a daily basis. Correction officers regularly abuse their power in order to brutalize people, but that abuse happens in secret, behind bars, and we never see the videos.

Inaction or incomplete action by the Governor, District Attorneys, the Mayor and Council members at this moment may amount to a death sentence for those currently on Rikers Island. Formerly incarcerated activist Natasha White said:

Over 150 years since the first Juneteenth celebration, too many of our people are still not free. Rikers Island remains a symbol of white supremacy. The 400 acre penal colony once held free Black people captured by a corrupt system of law enforcement. Today it continues in the same tradition, with nine massive jails that hold thousands of Black and Brown people in conditions where they are dehumanized and denied due process.

In the wake of COVID-19, we call on elected leaders to depopulate, defund, and demolish jails and prisons, and invest in repairing the harms of centuries of systemic racial oppression.” Background: This rally comes as COVID-19 is tearing through jails and prisons, including Rikers Island, where the infection rate is still 5x greater than in the rest of New York City.

People held in City jails are not at liberty to practice social distancing and other measures to keep themselves safe. People who work in City jails, and the people they are in contact with, are also at risk. In March, the Board of Corrections issued recommendations, following a letter from advocates, calling for the immediate release of people over 50, people with underlying health conditions, people detained for administrative reasons, and people serving City sentences.

While some releases have been carried out since then, they fall short of meeting the Board’s full recommendations, and the number of people in City jails has begun to increase (to 3,970 currently) after reaching a low of just over 3,800 people last month. Three people have died in DOC custody due to COVID-19. Prior to COVID-19, New York City’s jails were already in a state of crisis, where the Department of Corrections has long failed to keep people in its custody safe. The spread of coronavirus has heightened the crisis, and the need for all elected leaders to take action in service of human rights.

“On this great day, as we take a moment to reflect over our ancestors and their legacies, we must acknowledge so many years later, that there are still mountains of oppression and systemic, generational genocide placed on Black and Brown lives. The legacy of this liberal city is still tarnished by the very existence of the Rikers Island jails. I’ve worked on Rikers – for its staff, it’s hell on earth. For those detained – unseen and often not believed – it’s mental torture and a direct violation of their human rights. We must not only defund the NYPD but their counterparts, the Department of Correction as well, if we truly want to abolish of white supremacy once and for all. Then, we the people, must see good faith from our local government within this upcoming budget,” said Dr. Victoria A. Phillips, a member of the Jails Action Coalition.

“As a community that believes in the power of personal transformation, individual and community healing and using restorative justice approaches to mitigate conflict, Exodus Transitional Community calls on the City to divest from failing systems and invest in communities. The same commitments the City has made to defund NYPD and stand up against NYPD’s union should be made with respect to the Department of Corrections (DOC). There are nearly 9,000 correctional officers and approximately 4,000 detained/incarcerated people. And, the use of force and violence by correctional officers (according to the most recent Nunez report) is at an all-time high. The City has an opportunity to make a commitment during this budget cycle to defund DOC and stand up against the Correction Officers Benevolent Association (COBA) to ensure that real and lasting change occurs. For far too long our fellow New Yorkers have suffered on Rikers Island. We cannot wait any longer. We must expand decarceration efforts, and invest the money saved by defunding DOC into housing so we can heal our communities.” said Kandra Clark, Vice President of Policy & Strategy at Exodus Transitional Community. 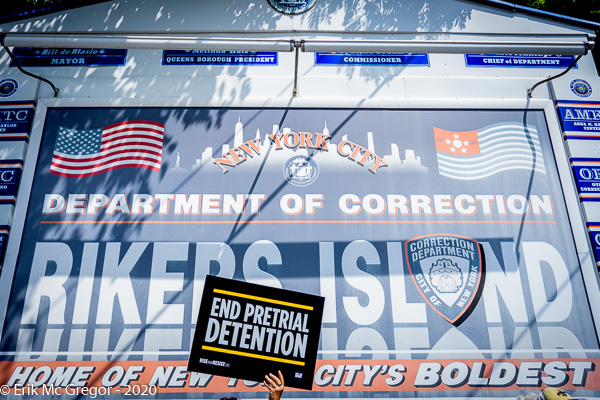