Excluded Essential Workers on hunger strike for 14 days and State Electeds to call for a $3.5B fund in NYS Final Budget and to maintain flexible application requirements

NEW YORK, NY — State elected officials joined a group of excluded essential workers who have been on hunger strike for the past two weeks for a press conference at Washington Square Park in Manhattan on March 29, 2021 to call on state lawmakers not to leave excluded workers behind in their negotiated budget, which is expected to be released over the coming days.

Governor Cuomo has been pushing unworkable restrictions that will cut many workers out, such as requiring pay stubs, bank records, and ITINs that many excluded workers don’t have.

The hunger strike is the final escalation in a months-long campaign to win funding for excluded essential workers. Dozens of workers and community allies have joined over the course of the fast, including dozens of excluded workers.

Excluded essential workers have called for a $3.5 billion fund to provide retroactive, direct cash assistance to workers who haven’t been able to access unemployment benefits, stimulus checks, or other government assistance.

A $3.5 billion fund would ensure excluded essential workers have access to the same level of unemployment benefits and other income support that has been available to other workers. 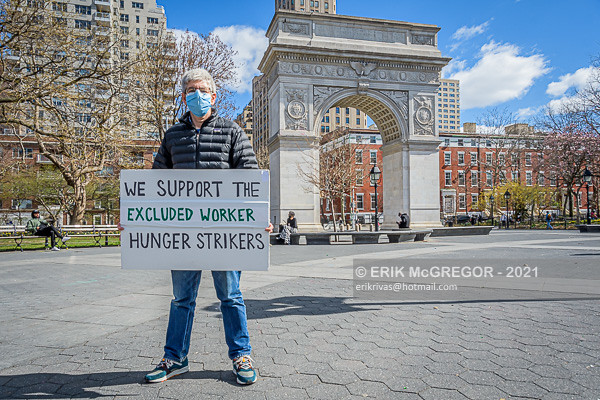