National Grid was presenting to Community Board 1 on their Metropolitan Reliability Infrastructure (MRI) project, a new 30inch high-pressure fracked gas transmission pipeline through Brooklyn destined for a National Grid depot on Newtown Creek. The company is asking for an additional 185 million ratepayer dollars to finish the current phase under construction in Bushwick and continue the pipeline into East Williamsburg and Greenpoint.

The CB-1 meeting was packed wall-to-wall with opponents of the pipeline, many of whom were furious that they were just hearing about it after construction was already underway.

Many community members questioned National Grid on how long they knew the pipeline roue would go through Bushwick, Williamsburg and Greenpoint before presenting to the community. When asked, Grid couldn’t provide an exact date but said they knew by some point in 2016.

“I live a couple blocks from where National Grid is ripping up our streets to install this pipeline, but only found out about it because they’re asking for a huge chunk of ratepayer money in their current rate case,” said Bushwick resident and director of Sane Energy Project Kim Fraczek. “If National Grid had come to our community from the start they would have learned right away that we absolutely reject our bills going up to pay for a dirty fracked gas pipeline that will harm our climate and puts tens of thousands of people in the evacuation zone.”

The National Grid representatives presenting to CB-1 said they did not know how much money the pipeline would cost rate payers even though the company filed testimony before the Public Service Commission in December claiming to need 184,670,417 to accelerate construction by a year and finish the pipeline by fall of 2020. National Grid also said the MRI project was not a pipeline.

Local elected officials agreed that National Grid failed to do proper outreach and that the pipeline goes against groundbreaking city and state climate law.

“Not only is this pipeline bad for our health, safety, and climate, but National Grid wants an additional $185 million in rate hikes to pay for it,” said City Councilmember Rafael Espinal in a written statement released before the community press conference. “National Grid is back-pedaling by only now providing information due to public demand from the community, so we must keep up the pressure. I stand in solidarity against the continuation of building the pipeline and I call for all officials and community members throughout Brooklyn to do the same, as it will be our Brooklyn communities to bare all the risks while National Grid takes all the profit.”

Comptroller Scott Stringer and Public Advocate Jumaane Williams also released statements calling for National Grid’s rate hike to be rejected and for the pipeline not to be built.

“Projects like the North Brooklyn pipeline are entirely incompatible with a sustainable future for our city. It should not be built and I stand with residents across Brooklyn who reject building out a massive fracked gas pipeline running beneath their feet,” said Comptroller Scott Stringer in a statement. “New Yorkers deserve an energy system that is sustainable, reliable, and affordable, not just more of the status quo which lines the pockets of the utilities at their expense. I have called for a moratorium on major gas infrastructure because we know the infrastructure we install today only puts our climate goals further out of reach. Doubling down on fossil fuels is tantamount to climate denial. If our utilities won’t think past their bottom lines and consider the future of our planet, we need to develop plans for the potential public takeover of New York’s natural gas system.”

“I am calling on Governor Cuomo and the PSC to say “no” to National Grid’s rate hike. I’m asking them to not reward last years egregious behavior with a prize when, like a school yard bully, the corporation held customers hostage by denying them services because they were not getting what they wanted,” said Public Advocate Jumaane Williams. “The MRI Project is a project that fills National Grid’s coffees, a project that was largely and deceptively undertaken to install transmission pipes that will not serve the community being put at risk and which will harm our environment by in increase our reliance on fracked gas.”

State Senator Julia Salazar, who couldn’t attend the CB-1 meeting because she was in session in Albany, but had come out against the pipeline in November saying “We need geothermal shared loops for heating and cooling, NOT pipeline expansions. “ was represented by Alvin Pena. “National Grid’s plan to raise rates in order to put a fracked gas pipeline through North Brooklyn makes no sense for the public and is intended to benefit shareholders over ratepayers and the planet’s health,“ said Pena. “This pipeline is an irresponsible project that will lead to significant negative impacts for the surrounding community and will also quickly become a stranded asset.”

“National Grid will tell us this pipeline is about reliability, but they will only reliably contribute to climate catastrophe,” said Wes Higgins of the NYC- Democratic Socialist of America. “But we are more than just consumers with pocketbooks for National Grid to plunder. We are neighbors and they will dig up our streets. We are families and they will poison the air for our children, elderly and sick.”

As part of their Public Power campaign NYC-DSA wants to take over utilities like National Grid and put the power back in the hands of communities.

“This community is no stranger to what National Grid is trying to do. The history of North Brooklyn can be told by listing the industries that came here, destroyed the air, the soil, the water, the health of the working class immigrants who lived here, and left,” said Kevin LaCherra, whose family has been in Greenpoint for 120 years. “They made their money off our backs and let the next couple of generations deal with the consequences. We’re still dealing with the consequences today. A pipeline that will carry plenty of profit for National Grid but that will leave this community where we’ve found ourselves time and time again. In danger.”

“It is hypocritical for the state to continue with the status quo after passing the Climate Leadership and Community Protection Act,” said Emily Gallagher a CB-1 member and candidate for State Assembly. “This is absolutely not climate leadership and it is not in the community’s best interest.”

“Being communities of color, we will be hit first and worst by climate change. We’re already feeling the effects so we are extremely alarmed by this,” said Leslie Velasquez of El Puente. “And we’re not going anywhere.  We’re going to stand here with all of our allies, for however long it takes. We’re in it for the long haul.” 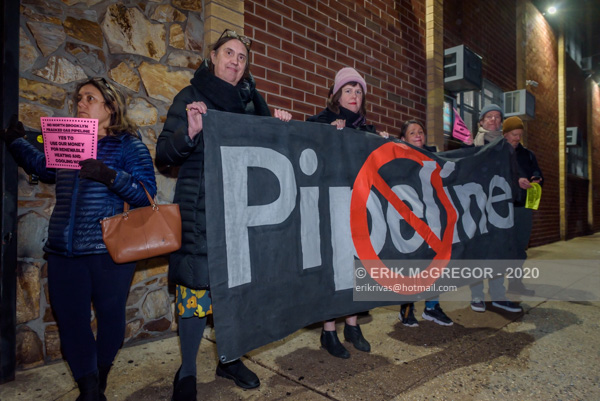