New York, NY — At a press conference before the monthly Public Service Commission (PSC) meeting on December 12, 2019 New Yorkers from across the state called on the PSC to reject Con Ed’s proposed rate hike which will raise electricity rates over the next three years by a compounded 16% and gas rates 25% for cooking customers and 34% for heating customers.

The rate hike, which the PSC is expected to vote on at their January meeting, invests hundreds of millions of ratepayer dollars in fracked gas infrastructure every year, which advocates say will soon become stranded assets as city and state climate laws are implemented.

“Con Ed’s plan to invest almost a billion ratepayer dollars a year in fracked gas infrastructure fails the climate test,” said Lee Ziesche with Sane Energy Project, a member of the Renewable Heat Now Campaign. “And it’s shameful New York City and the New York Department of Public Services have signed off on this plan that will invest our hard earned money in stranded fossil fuel assets. If the PSC is really acting in the public interest they will reject this plan.”

Their call for the PSC to reject Con Ed’s rate hike was joined by a number of elected officials, including Comptroller Scott Stringer and Public Advocate Jumaane Williams.

“I urge the Public Service Commission to reject Con Edison’s proposal to raise utility rates so they can funnel more cash into fossil fuel infrastructure that will dig us deeper into the climate crisis,” said Comptroller Scott Stringer. “I am disappointed that the City would support any deal which allows Con Edison to spend billions of ratepayer dollars to bolster the city’s natural gas network, instead of meaningfully investing in renewable and electric alternatives. New Yorkers deserve an energy system that is sustainable, reliable, and affordable, not just more of the status quo which lines the pockets of the utilities at their expense.”

“When methane leakage emissions are included, “cleaner burning” natural gas is actually worse than both fuel oil and coal for heating” said Acton. “It is impossible to meet the Governor’s emission reduction goals with continued natural gas expansion. We need to shift to heat pumps powered by clean electricity and harvest free ground heat, the clean heating fuel for future generations.”

Multiple parties within the rate case argued that Con Ed’s plan goes against recently passed city and state climate law, but Con Ed claims they are “not prepared at this time to presuppose what is required to meet the Climate Leadership and Community Protection Act’s (CLCPA) goals and its implementation timeline.”

Following the press conference, New Yorkers held a silent protest against gas infrastructure and in support of renewable heating within the PSC meeting. Much of the fracked gas infrastructure will be in Queens where Con Ed is proposing to expand a major transmission line from 20 inches to 36 inches and invest 65 million ratepayer dollars to extend the life of an LNG facility in Astoria.

“My office is proud to stand today with the Sane Energy Project and the entire Renewable Heat Now campaign in calling on the Public Service Commission to fund renewable heating for New Yorkers — not the expansion of fracking that will only continue to line the pockets of Con Edison and fossil fuel corporations at the expense of everyday ratepayers,” said Queens Assemblymember Ron Kim. “With the leadership of so many incredible grassroots activists and organizers across the state, we were able to pass the CLCPA and fight for a green, democratic, and environmentally justice future. We cannot spend over $400 million dollars per year of people’s money for a capitalist, for-profit, investor-owned utility to expand fossil fuel infrastructure — a larger pipeline for the transmission of fracked gas — that will only continue to pollute our environment, particularly in working class communities of color. I implore the Public Service Commission to keep the well-being of ordinary New Yorkers at the forefront of everything, categorically reject Con Edison’s proposal to build more fracked gas infrastructure, and do the morally right thing by funding renewable heat.”

Members of the New York City Democratic Socialist of America, who were a party in the rate case, were deeply critical of the PSC and believe a democratic solution cannot be found as long as utilities are beholden to corporate shareholders. “We need energy democracy. But if we want to change who the utilities are accountable to, we need to change who they’re owned by,” said Christy Gentry with NYC-DSA. “There is no reason that shareholders should keep leeching profits off of our utilities. They are public utilities, and they should be publicly owned.”

“Con Edison is attempting to raise rates on hardworking New Yorkers and build fracked gas pipelines while still paying out dividends to its corporate investors,” said Alvin Peña representing State Senator Julia Salazar. “The for-profit energy model has decisively failed, and New Yorkers deserve more control over their electricity infrastructure. We need to make immediate investments in renewable energy and climate infrastructure, not double down on the dangerous failed policies of the past.”

This is the fourth month in a row that members of the Renewable Heat Now Campaign have attended the PSC meeting demanding they take climate action.

“It is my most ardent hope that your children will have grandchildren and they will tell them about you. They will regale them with the story about the day that the PSC in New York City saved the world,” said Megan Dyer with Mothers Our Front in Westchester. “When the PSC refused to allow Con Ed to put in any more new gas pipelines in Westchester County.”

Part of the rate hike is to fund a major pipeline expansion from the Bronx into Westchester. 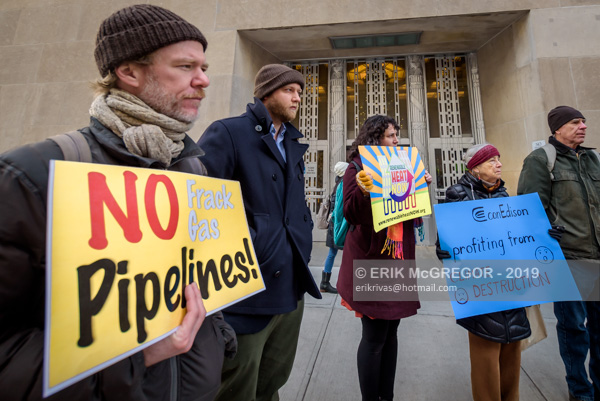