On Valentine’s Day, the fight to stop the Williams pipeline hits the heart of NYC

New York, NY – A clear message to Governor Andrew Cuomo struck the heart of Times Square this Valentine’s Day. A building-side message was displayed on February 14, 2019 calling the Governor to “Be a real climate leader and stop the Williams fracked gas pipeline”. As New Yorkers gear up for public hearings being held on Tuesday, February 26, organizers argue stopping this dangerous project is Cuomo’s first major test for his commitment to a Green New Deal for New York.

“If Cuomo has a heart this Valentine’s Day, he’ll stop the Williams fracked gas pipeline from wreaking havoc on our communities,” said Cata Romo of 350.org and the Stop the Williams Pipeline NY Coalition. “We love New York, that’s why we’re here in the heart of Times Square fighting for a safe and healthy climate, including the very communities hurt worst and still recovering from Superstorm Sandy six years later. There’s no room for fossil fuels in a Green New Deal for New York.”

Accident-prone Williams wants to build the unnecessary 23-mile fracked gas pipeline as a Northeast Supply Enhancement (NESE). This would transport fracked gas from Pennsylvania across New Jersey through the New York Harbor, past Staten Island to the Rockaways.

Last week, members of the Stop the Williams Pipeline NY coalition delivered over 14,400 petition signatures urging Cuomo to stop the Williams pipeline. Organizers are gathering comments to the DEC urging the Cuomo administration to reject the pipeline ahead of the February 26 hearings in NYC.

“Rockaway communities have come out strongly against this pipeline and more and more New Yorkers across the state are joining them,” said John Cori, President of the Rockaway Beach Civic Association. “Governor Cuomo, have a heart. Show some love for Rockaway and veto the pipeline.”

Last month, FERC issued its final Environmental Impact Statement (FEIS), all but green-lighting the project. This comes as reports reveal the Trump administration is considering taking action to limit states’ power to block dangerous fossil fuel projects, such as the Williams NESE fracked gas pipeline. The pipeline would lock in fossil fuel use in the City for decades, running counter to efforts to reduce greenhouse gas emissions, warnings of the IPCC report and National Climate Assessment, and commitments to go beyond the Paris agreement.

“I love this city and especially our beaches and waters,” said JK Canepa of Sane Energy Project and and the Stop the Williams Pipeline NY Coalition. “I love that the whales have returned, and that the ancient horseshoe crab and the endangered Atlantic sturgeon and the tiniest turtles find refuge here. We cannot allow them to be harassed or the fish we eat to be contaminated by arsenic, lead and mercury released by trenching into the sea floor to lay an expensive and polluting pipeline we don’t need, we don’t want, and we shouldn’t have to pay for.”

This comes just over one month ahead of plans for a mass Green New Deal for New York forum in NYC on Wednesday, March 20, featuring key elected officials and a broad spectrum of New Yorkers. 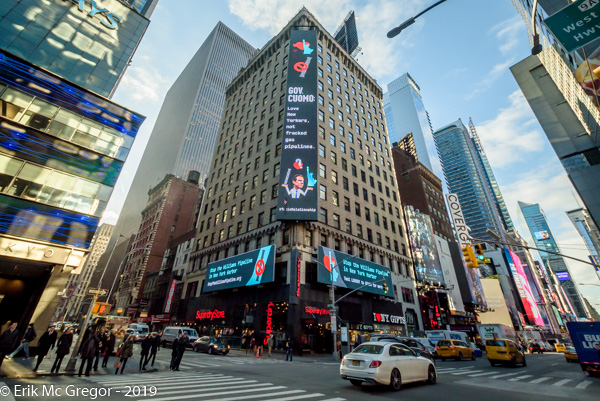