New York, NY – Members of the activist group Rise And resist gathered on February 2, 2022 at the sidewalk in front of the Thurgood Marshall Federal Courthouse in Foley Sq. to demand that everyone involved in the planning of the coup and the attack on the Capitol be indicted.

It’s been thirteen months since the January 6th insurrection, and over 750 people have been charged in the attack.

Yet only 10 people, associated with the Oath Keepers, have been charged with Seditious Conspiracy.

It is clear that the Oath Keepers were not organizing the attack on the Capitol by themselves.

We ask the Justice Department – where are the indictments of the real coup plotters? Why haven’t Trump, Flynn, Stone, Meadows, Bannon, and Giuliani been indicted?

Merrick Garland do your job! 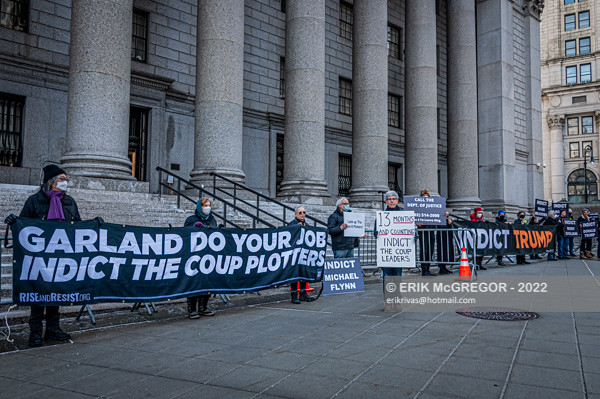