New York, NY – Anti-War activists gathered on March 19, 2021, the 18th anniversary of the invasion of Iraq, at the Manhattan Bridge Plaza at Bowery and Canal holding banners and signs facing the late afternoon Friday rush hour traffic across the bridge as well as pedestrians in the neighborhood, to oppose the United States’ endless cycle of war and militarism.

Participant groups demand the Pentagon budget be slashed to pay reparations to victims and for other human needs.

That money could have been used to fight poverty, protect our threatened environment, and educate our people. Instead, Washington has used it to destroy lives and enrich war profiteers including Amazon, L3 Communications, Raytheon, and General Dynamics.

The Anti-War Activists voiced their opposition to the endless U.S. wars in Iraq and other countries, as well as the government’s war on the climate, the economy, and the poor. 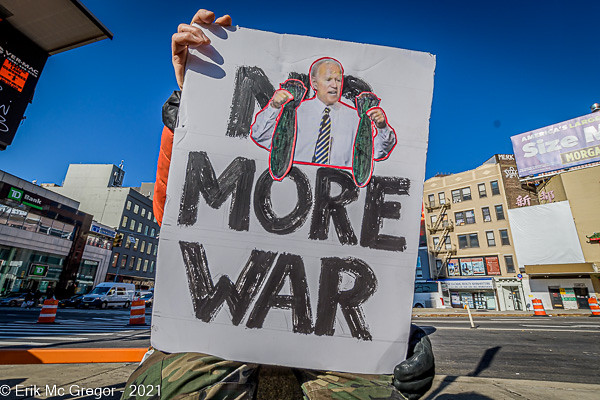