NEW YORK, NY — On August 30, 2020 Gays Against Guns (GAG), the direct action, gun violence prevention group formed by members of LGBTQ communities and allies immediately after the Orlando Pulse massacre in June, 2016, held a day of action protest in New York City’s Union Square to call attention to the violent, bloody cycle of death that Americans are witnessing on a constant repeat setting: The Cycle of Death that has emerged at the nexus of white supremacist policing, the Black Lives Matter movement, the Alt-Right, white supremacist militia movement, and American gun culture; all of it egged on by President Donald J. Trump and his enablers in both the political and media spheres.

Gays Against Guns believes that we, as a society, need to look at this cycle, to see it for what it is, to call out the false white supremacist narratives that seek to lay the blame for this cycle on Black Lives Matter activists, and to demand that the American people take a stand and BREAK THE CYCLE!

“This cycle serves to perpetuate the fearmongering on the political right, as evidenced by many speeches give at the Republican National Convention. It also serves the interests of the incel, Alt-Right, Proud Boy, and neo-Nazi movements and police officers who consistently protect violent extremists like Kyle Rittenhouse, the Kenosha mass shooter,” said Jay W. Walker, a GAG organizer.

The action, taking place days after the close of the Republican National Convention, will hold the Trump Administration accountable for ginning up the miasma of hate that has led the sharp increase in hate crimes committed by civilians and police officers over the past 4 years. 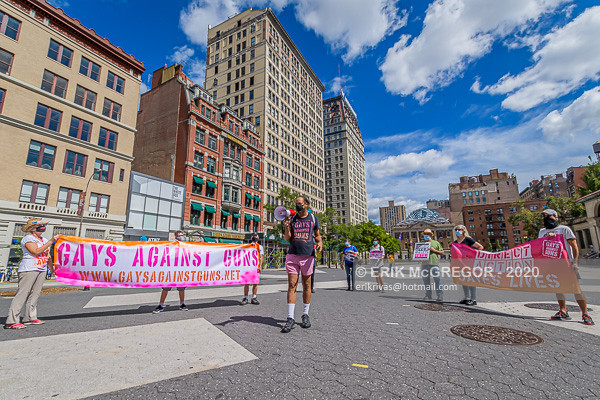