Thousands of New Yorkers gathered on June 28, 2020 at Foley Square marching in support of the #OccupyCityHall action for NYPD budget cuts, making its way north to Washington Square Park.

Marchers were asked to wear face masks to protect against COVID-19 and to maintain safe distancing. Reclaim Pride provided masks, hand sanitizer and water to those who needed them. This March, like all current protest Marches, did not have a City/NYPD permit.

Wearing masks and socially distanced, the 2nd annual Queer Liberation March will join the millions of protestors in the streets all over the United States in marching for an end to the brutalization of Black communities by police and local, state and federal governments.

Horrified by the police murders of George Floyd, Breonna Taylor, Tony McDade, Layleen Polanco, Rayshard Brooks and untold numbers of others, mourning the endless violent deaths of Black trans women and men like Dominique “Rem’mie” Fells and Riah Milton, and inspired by the historic, Black-led protest movement that has taken to the streets here in NYC and across the world, Reclaim Pride supports demands for immediate defunding, dismantling, disarming and reimagining of police forces.

Those funds must be dedicated to services including housing, healthcare, education and reparative and restorative justice for Black and Brown communities. We must prioritize reparations for those who’ve been oppressed and murdered for hundreds of years.

While all Black people are at constant risk of police brutality and murder, we as queer and trans activists recognize that Black Trans, Gender Non-Conforming, and Non Binary people, especially Black Trans Women, are faced with the intersection of vicious state and societal racism, transphobia, misogyny, and classism. This must stop now.

Reclaim Pride Coalition supports the demand for at least a $1 billion cut to the NYPD budget and a reassignment of those funds and much more to housing, healthcare, employment, reparative and transformative justice and other necessities for Black and other people of color communities, particularly for Black trans people. 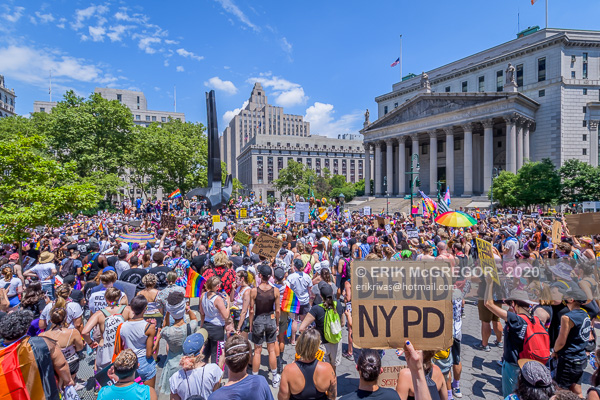