New York, NY – On the night before JPMorgan Chase’s annual shareholder meeting, activists with Stop the Money Pipeline projected 30ft tall images of people holding protest signs with messages calling on CEO Jamie Dimon to “stop funding fossil fuels” on a wall across from his apartment in New York City.

The action was organized by Stop the Money Pipeline, a coalition of over 110 organizations working to end the financing of fossil fuels.

People around the country have sent in pictures of themselves holding homemade signs with a personal message to Dimon asking him to stop funding fossil fuels and climate destruction.

A mobile projector van projected these images so that they show up 30ft high on the building across from Dimon’s apartment in Manhattan.

JP Morgan Chase is the world’s number one banker of fossil fuels. Since 2015, Chase has shoveled more than $268 billion into fossil fuels, according to the Banking on Climate Change Report. This January, Chase took a series of “baby steps” by committing to stop funding coal firms and oil and gas projects in the Arctic, but it is still investing billions in climate destruction.

At this year’s shareholder meeting, Chase is coming under pressure to adopt a plan to measure the climate impacts of its investments and kick former Exxon CEO Lee Raymond off its board. Nine state treasurers recently joined the call from the comptrollers of New York City, New York State, and Pennsylvania to remove Raymond from the board. 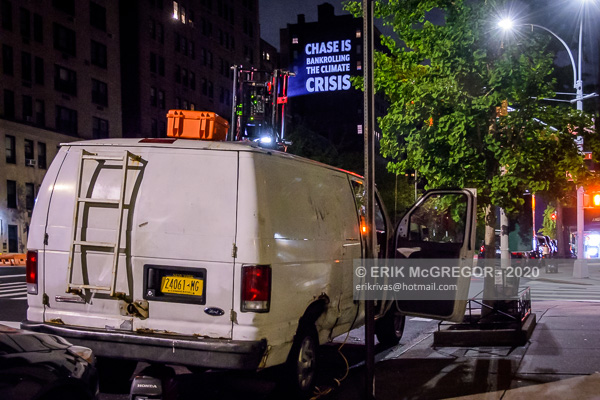