New York, NY – Members of the activist groups March For Truth and Rise and Resist and hundreds of New Yorkers took to the streets gathering at Father Duffy Square in Times Square, holding signs an banners chanting “Nobody Is Above the Law”, at an emergency demo followed by a march down Broadway to Herald Square on January 28, 2020 demanding that the Senate hold a full trial with witnesses and evidence.

The revelation that John Bolton’s yet-to-be-published book contains additional evidence that Trump was trading military aid for dirt on the Bidens is the latest proof of impeachable crimes. Americans are done with the lies and the cover-up.

We deserve to see all the documentary evidence and hear from all potential witnesses. We will not tolerate the GOP’s obstruction of justice.

This democratic process is necessary in order to protect democracy, halt rising authoritarianism, and set a precedent for how we, the people, and our elected representatives will deal with future totalitarian. 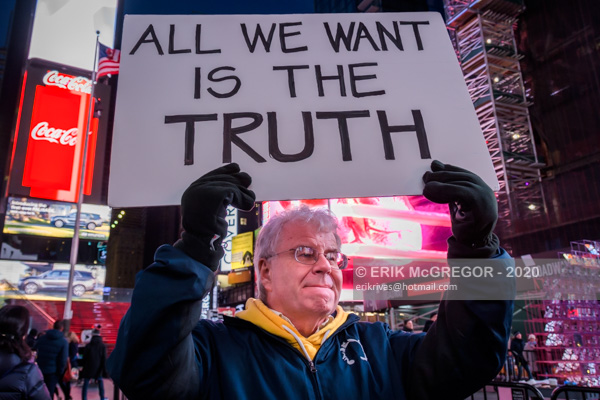