New York, NY – Members of the activist group Rise and Resist held a protest at Trump Tower in New York City on January 11, 2020 demanding Donald Trump to be removed from office following his impeachment, dropping a banner from the second floor balcony of the tower that read REMOVE TRUMP.

After the banner drop, Trump Tower security was forced to evacuate the tower lobby and close it to the public for over an hour, as participants moved the protest outside the building.

Activists then proceed to read out loud a list of his crimes, including obstruction of congress, abuse of power, witness tampering, violation of asylum laws, kidnapping, sexual assault, assassination, war crimes, and violation of the emoluments clause along with numerous other acts.

No arrests were reported during the action and Trump Tower security refused to give an explanation on why the tower was shut down to the public for over an hour.

Rise and Resist is calling on Senators in both political parties to uphold their oath of office and conduct a fair and impartial trial following Trump’s impeachment.

Rise and Resist, formed in the aftermath of the 2016 Presidential Election, is a direct action group committed to opposing, disrupting and defeating any government act that threatens democracy, equality and our civil liberties. 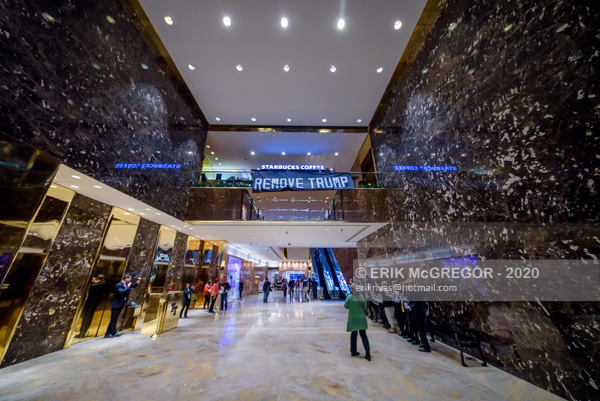