New York, NY – New Yorkers started a 3-day Climate Hunger Strike outside Governor Cuomo’s Midtown Manhattan office on May 14, 2019 ahead of New York State’s May 16 permitting deadline for the Williams NESE fracked gas pipeline proposed for New York Harbor. The women ranging from ages 21 to 75, are sitting outside the office on a water-only hunger strike from 8am-7pm each day until a decision is made on the pipeline.

New York State must make a decision to deny or approve a permit for the Williams NESE fracked gas pipeline by May 16. The Federal Energy Regulatory Commission (FERC) approved permits for the pipeline on May 3, and declined to take greenhouse gas emissions and climate impacts into account. New York State can now only deny the pipeline with the 401 Water Quality Certificate as granted by the Federal Clean Water Act.

Since FERC will not take climate impacts into account, despite dissent by one of its commissioners, and New York State is limited to only one water permit to approve or deny interstate fracked gas pipelines, the women say they are participating in the hunger strike to show New Yorkers reject the project because of its climate ramifications. They also want Governor Cuomo to know that the people are closely watching his decision and urge him not to wait until the last minute.

Three final days remain for New York to decide and their concern is that two other pipelines in New York State, the Northern Access Pipeline in Western New York, and the Valley Lateral Pipeline in Orange Co., were both overturned by federal court because the Cuomo administration did not declare water permit denials in a timely manner. At a time when the federal government is trying to fast-track pipelines and strip states of their rights to deny projects, they’re urging Cuomo to respond quickly and boldly.

The hunger-strikers say that the Williams NESE pipeline will impact New York waters, and our health, safety, democracy, and climate. Despite banning fracking in 2014, Governor Cuomo has approved fracked gas infrastructure projects across the state. Independent researchers are finding large leakage rates of methane from both fracking and fracking infrastructure, putting Cuomo’s approval of pipelines and power plants at odds with the State’s climate goals.

“In order to build this pipeline, we’ll have to disturb all the poisonous chemicals, like lead and mercury, that have sunken to the bottom of our shores and been buried over the years. This will destroy the unique environment in Jamaica bay and along our coasts, leaving millions of animals dead and disabled from poisoning, and will contaminate beaches, meaning our communities, our kids, and our water, will be exposed to these dangerous substances. Not to mention, in our fight against this oncoming climate crisis, we need to avoid fossil fuels at all costs. Fracked gas still emits unacceptable levels of pollutants, and one pipeline spill WILL destroy the unique environment that surrounds us. I deserve a livable future, my younger cousins deserve a livable future, kids being born now deserve a livable future, and this pipeline isn’t it.” – Lily Walsingham-Johnson

“I have lived in and loved New York City for 18 years. I have done the Polar Bear Plunge at Coney Island more times than I can count. I have biked over every bridge. I have mucked houses in the Rockaways after Hurricane Sandy. I first learned about fracking in 2009 and have been fighting it everyday since because I understand that water is life. I understand directly how corporate greed leads to death and harms families. I witnessed our victory against fracking in NY state and I know that people power is stronger than anything. We cannot deny the climate is on the brink and yet I have hope. We are witnessing countries across the world take the necessary steps to reduce their carbon foot print and get us off the fast track to mass extinctions. Williams, along with the entire fossil fuel industry, has absolutely no regard for human life. They will bulldoze every precious eco system and poison every ounce of clean water if they can make a profit. I stand in solidarity with all people fighting on the frontlines of pipeline battles that snake across the country. Now is the time to act. Cuomo must listen!” – Monica Hunken

“I was born in 1989. The year before I was born James Hanson testified before Congress on climate change. My whole life our Government has known about climate change and here we are 30 years later still having to fight a fracked gas pipeline. There’s no agency at the Federal or State level that will look at the climate impacts of the Williams fracked gas pipeline. But New Yorkers are paying attention to the climate impacts. We’re paying attention to what will happen on the other end of the pipeline in Pennsylvania where communities are being fracked. We are paying attention to the impacts on our waters. And we’re here to say no to the Williams Pipeline.” – Lee Ziesche

I have been fighting against fracking for the last decade. I worked a full time job while organizing my community against a pipeline in NYC in 2011. I saw the effects of fracking on the other side of the pipeline where families could not use their tap water to drink or to be their children because of fracking. Over the years, I have learned about agency corruption, financial shell games, industry silencing and bullying of people who speak about their poison. I have worked together with people across New York and neighboring states who share knowledge and learn to resist together to protect their health, safety, and democracy. It is unconscionable that we are dangling in the final days for Governor Cuomo, who has banned fracking because of health and safety hazards, to make a decision about the Williams fracked gas pipeline proposed for the New York Harbor originating in Pennsylvania where my mom lives. It is unconscionable that we have to hunger strike to bring attention to this tragedy. It is unconscionable that, in 2019, we are not running our state and our nation on community-owned renewable energy because we are afraid to stand up to an economic bully. Governor Cuomo, halt the Williams Pipeline.” – Kim Fraczek

“It’s time to put ourselves on the line for the future of our children and our planets life-support systems. It’s no exaggeration to say that this is the most urgent call in human history. Life lies in the balance. We must stop using the air and water as places to dump dirty carbon especially from fact gas. The Williams NESE Pipeline would carry the methane from Wells that poison the drinking water of the local people, then cut through forests and rip into streams and wetlands on its way to tear up our seafloor. The Williams and ESD Pipeline must not go through. We are here to let our governor know That the people of New York have spoken. We don’t want this gas, we don’t need this gas, and New Yorkers should not have to pay for this gas. Keep your promise of a green new deal, Governor Cuomo, and tell Williams no!” – Judith Canepa

“When I was a young woman, computers were the size of refrigerators and people burned coal, oil, and gas to power their lives. Now, computers fit in our pockets but people still use coal, oil, and gas to power their lives. Sustainable energy technology has been ignored by our elected officials because they are in the pockets of the fossil fuel industry. Although the fossil fuel industry has known about the effects of greenhouse gases on our environment for over forty years, they have systematically lied to the public and the kept their research secret. We are now facing a climate crisis. We are looking at the end of life as we know it unless the politicians and policy makers embrace a clean, green energy future. The Williams Pipeline is wrong headed. It is dirty, dangerous, and unnecessary. It is old technology that does not belong in our future. I call on Gov. Cuomo to be a climate leader and stop the Williams NESE Pipeline. The world needs leaders not politicians now!” – Joan Flynn

This will be the first major fracked gas infrastructure project Cuomo’s administration will rule on after his announcement of a “Green New Deal” for New York. 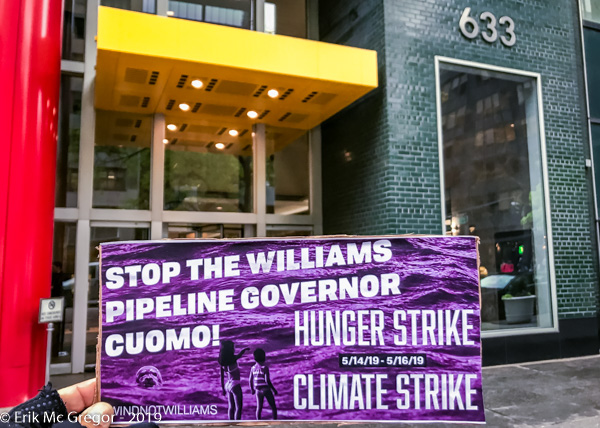