Hundreds students took part in the School Strike for Climate in NYC, joining over 500 events worlwide

New York, NY – Hundreds students took part in the School Strike for Climate on May 3, 2019 in New York City, joining over 500 events worldwide. The students held a rally and perform a die in outside City Hall to bring attention to Mayor De Blasio’s inaction to declare a climate emergency.

This is part of a movement where tens of thousands of students from all fifty states and around the world are expected to strike on May 3rd to bring attention to the environment.

The youth of America are striking because the science says we have just a few years to transform our energy system, reduce our greenhouse gas emissions, and prevent the worst effects of climate change.

The youth of America are striking because our world leaders have yet to acknowledge, prioritize, or properly address our climate crisis.

The youth of America are striking because marginalized communities across our nation —especially communities of color, disabled communities, and low- income communities— are already disproportionately impacted by climate change.

The youth of America are striking because if the social order is disrupted by our refusal to attend school, then the system is forced to face the climate crisis and enact change.

With our futures at stake, the youth of America call for radical legislative action to combat climate change and its countless detrimental effects on the American people.

The youth of America are striking for the Green New Deal, for a fair and just transition to a 100% renewable economy, and for ending the creation of additional fossil fuel infrastructure.

Additionally, The youth of America believe the climate crisis should be declared a national emergency because we are running out of time.

The School strike for climate (also known variously as Fridays for Future, Youth for Climate and Youth Strike 4 Climate) is an international movement of school students who are deciding not to attend classes and instead take part in demonstrations to demand action to prevent further global warming and climate change. Publicity and widespread organising began when the climate activist Greta Thunberg staged an action in August 2018 outside the Swedish Riksdag (parliament), holding a sign that read “Skolstrejk för klimatet” (“School strike for the climate”) 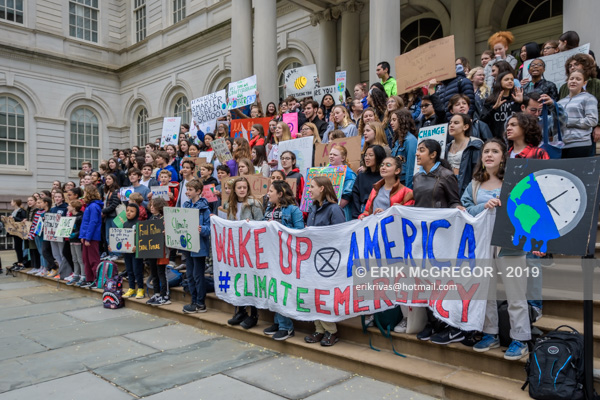