Police arrested at least nine people — including three rabbis — who were demonstrating as part of a protest against BlackRock.

The demonstrators who were arrested include Rabbi Rachel Timoner, Rabbi Rachel Kahn-Troster, and Rabbi Stephanie Kolin.

Jewish youth were joined by intergenerational and interfaith allies at the action, including rabbis and clergy members. The activists specifically called on BlackRock’s CEO Larry Fink to stand by his Jewish values and end BlackRock’s funding of the fossil fuel industry and end human rights violations.

The Jewish youth-led BlackRock demonstration was part of the larger, multi-faith “Faiths 4 Climate Justice” uprising organized by GreenFaith, consisting of more than 500 actions in 41 countries. The campaign is timed to occur two weeks prior to global climate negotiations at the United Nations Climate Change Conference (COP26).

“We’re terrified for our future and we can’t afford any more of Larry Fink’s greenwashing,” said Morgan Long, co-organizer of action. “BlackRock is the biggest funder of climate destruction in the world. It’s time for Larry Fink to live up to his talk and divest from the fossil fuel industry and end BlackRock’s human rights violations.”

“The climate crisis is the greatest existential threat of our time,” said Madeline Canfield, Jewish Youth Climate Movement Associate and co-organizer of the action. “There is an entire world to be saved, enriched not by the money that corrupts it but by the beauty of the manifold traditions and peoples that inhabit it, so we are calling on BlackRock to divest from fossil fuels.”

“The climate catastrophe is not some vague unknown future: it is happening now,” said Rabbi Rachel Kahn-Troster, Vice President of the Interfaith Center on Corporate Responsibility.
“As a rabbi and Jewish leader, I owe it to my children to listen to the message of the Jewish youth leading today’s action, that those with power must be held accountable for not taking bold action. Financial institutions like Blackrock, who are top shareholders in the vast majority of S&P companies, must stop funding the fossil fuels that are warming our planet and invest in a sustainable future.”

“Judaism’s highest priority is saving lives,” said Rabbi Rachel Timoner, Senior Rabbi at Congregation Beth Elohim. “The Jewish youth who are leading us today understand that we are in a life or death moment, that we must divest from fossil fuels now in order to save lives.”

“In Genesis, amidst the opening words of our Torah, we are called upon l’ovdah ul’shomrah, to till and to protect this earth, to care for the land and the sea, for all growing things, for the health of this planet and one another,” said Rabbi Stephanie Kolin of Congregation Beth Elohim. “But our relationship with our environment has become broken and misaligned. We cannot afford to continue to live as if this world is our possession to be used as we please, and face no consequences.”

BlackRock is the world’s largest asset manager and one of the largest funders of the fossil industry and companies tied to deforestation. BlackRock also contributes to major human rights violations, including abusing indigenous territorial rights and displacing communities from their ancestral homelands.

In addition, BlackRock has invested 336 million dollars in Enbridge, Inc., a company currently building the disastrous Line 3 tar sands pipeline in Minnesota, which violates indigenous rights and would have the yearly climate change impact of 50 new coal-fired gas plants. 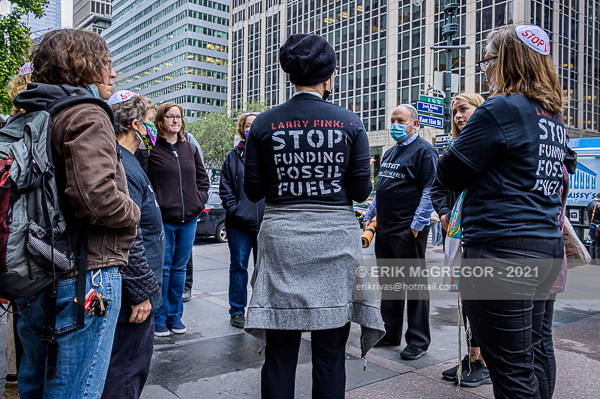