The group demand that the Mayor and city agencies act immediately to halt inhumane and poorly executed transfers of single New Yorkers experiencing homelessness from COVID-safe hotels into the unsafe congregate shelter system; stop NYPD street “sweeps” of people into the shelter system; and for the Mayor to take immediate action on Intro 146, a bill which require the City to pay higher rates in its rental assistance voucher program for homeless New Yorkers, which are currently so low as to be useless for the majority of people who qualify.

The action featured large signage of de Blasio as an irrelevant, out of date record album cover reading “de Blasio’s Greatest Hits,” with references to his recent declaration that New York’s future is bright, along with banners, signs and more.

After placing some homeless New Yorkers in hotel rooms during the height of the COVID pandemic, Mayor de Blasio is now trying to rush these people, an estimated 8,000 people out of their safe and comfortable settings into congregate shelters with few established COVID protocols and a low vaccination rate. Those who refuse to enter risk their safety in congregate shelters choose instead to live on the streets where they will be subject to increased NYPD street “sweeps.”

“As far as we know, less than 20% of homeless New Yorkers to date have been vaccinated for COVID-19,” said Charles King, CEO and Co-founder, Housing Works. “The Delta variant is causing a new surge of infections that will spread quickly in congregate shelters where as many as 50 people sleep in the same room. Many of our community members have been in single resident shelters and we know from their experiences that conditions are always unsafe, inhuman eand grim. It is outrageous that the Mayor not only overlooks the reality that services can be delivered to those who need them in much safer and more welcoming settings, but he insists on enacting this plan to transfer people into shelters now, unnecessarily putting their lives at heightened risk. ”

Mayor de Blasio first ran for his position in 2013 on a platform of healing the “Tale of Two Cities,” and has given lip service to addressing systemic inequity, but his broken record speaks for itself.

“We’re going to respond to the crisis borough by borough, neighborhood by neighborhood, family by family, person by person,” he said in his 2017 plan, and today we see that plan has resulted in a proliferation of smaller shelters, the use of “street sweeps” to keep homeless New Yorkers away from tourists and wealthy neighborhoods, and a complete disregard for the safety of people experiencing homelessness during this pandemic.

This action is part of the 30 Days of Homeless Rights campaign, created by directly impacted activists Maria Walles and Shams “Da Homeless Hero” DaBaron, and enacted by a coalition of homeless rights organizations and directly impacted advocates over the month of July, 2021.

The campaign was created in response to the city’s poorly conceived and unsafe plan to evict 8,000 homeless residents from the hotels where they have sheltered in place throughout the COVID-19 pandemic.

“The organizing work I did with my fellow residents at the Lucerne has given a newv oice to how we understand the housing crisis in the city,” said Shams DaBaron aka “Da Homeless Hero,” former Lucerne Hotel resident, homeless rights activist, and finalist forthe David Prize for his advocacy on behalf of homeless New Yorkers. “We speak for ourselves now, and we demand the Mayor stop the transfers, which will literally kill people. Congregate shelters are death traps, with people sleeping 30-50, sometimes more to a room and beds 3 feet apart. I would know, I got Covid from living in one and nearly died. Instead of sending homeless New Yorkers to their deaths, in direct violation of the CDC’s new guidelines, work with us to build real solutions to end homelessness now!” 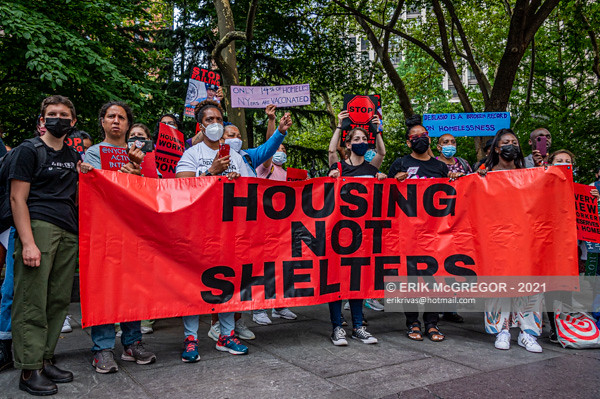