New York, NY – Outraged by the CUNY chancellor’s last-minute refusal to pay contractual equity raises for lower-paid faculty and staff, CUNY’s professional staff and faculty held a demonstration on Presidents’ Day outside CUNY Central Office in Manhattan demanding that the decision be reversed.

Almost 1,300 CUNY office workers—mostly people of color and women—in the Assistant to HEO title expected to see a contractually negotiated increase in their paychecks this week. Instead, they got no raise, with no warning from their bosses.

Chancellor Félix V. Matos Rodríguez, who writes about how CUNY can generate fluency in “equity-driven, social justice issues,” assured the union in December that the equity raises would be paid.

Instead, management informed the union late Wednesday that the chancellor had decided in early January to delay the contractual raises indefinitely. The union negotiated the raises explicitly to narrow salary gaps and address inequities of race and gender. Another 1,300 CUNY Lecturers learned that equity increases promised to them on April 1 will also not be paid on time.

The unpaid equity raises were negotiated in addition to the across-the-board 2% raise due last November. That raise is also being withheld for CUNY workers; raises for State employees have been frozen by by Governor Cuomo since April.

CUNY management is holding onto tens of millions of dollars in federal CARES Act stimulus money from June 2020. CUNY colleges were allocated another $455 million in federal funding in in December. The equity raises for Assistants to HEO would cost less than $100,000 per month. 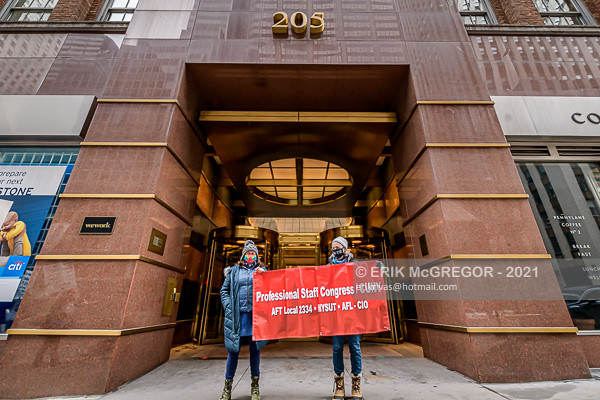