Democracy Has Its Eyes on You, Chuck! – Protest urging Schumer to stop SCOTUS confirmation hearings

Brooklyn, NY – Political activist groups and concerned citizens gathered outside Senator Chuck Schumer’s home in Brooklyn on September 26, 2020 as part of the nation wide coordinated protests targeting local politicians, demanding the Minority Leader and the Democrats to publicly, and vocally refuse to hold any hearings or confirm any new justice until after the inauguration of the next president.

As Trump announces his deeply conservative pick to replace the irreplaceable Ruth Bader Ginsburg in the weeks before the election, and the GOP reveal their deep hypocrisy over their illegitimate blocking of Merrick Garland, we will gather outside Senator Chuck Schumer’s building in Brooklyn to remind him: Democracy has it’s eyes on you, Chuck.

At this moment everything is at stake: Trump using the High Court to steal the election, the future of the Affordable Care Act, Roe v. Wade, voting right and civil rights. All in the middle of a pandemic and escalating climate disasters.

In this moment of fear and crisis, you may think that there is either nothing we can do to stop this bogus appointment or that Senator Schumer is already doing all he can. Neither is true. Join us and make these three demands:

2. The Minority Leader must use every procedural block to jam processes and delay proceedings:

3. The Minority Leader must make it very clear that when Democrats take back the Senate, they will repeal the filibuster repeal and expand the court.

We know first hand that the Minority Leader often responds to New Yorkers coming together to tell him exactly what we want. We need all hands on deck to tell him that what we want is nothing less than using Every Single Tool in the his procedural toolbox to save our democracy. And we will be watching closely, because 2022 is around the corner. 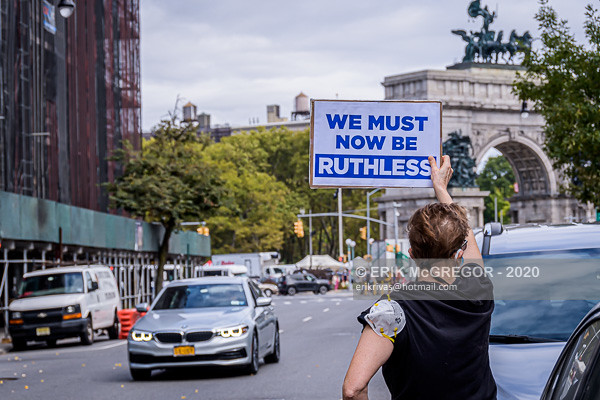