Brooklyn, NY – An unauthorized person initially on the tracks climbed on the roof of the Flushing Avenue subway station causing delays and multiple impacts to J and M trains on April 29, 2020.

Streets were closed to traffic and the subway service was suspended on both directions for several hours while NYPD and FDNY responded to the emergency situation with the unauthorized person threatening to jump off the roof.

The man, wearing a blue hoodie and tan pants, could be seen standing on the edge of the elevated tracks at the Flushing Ave. subway station.

The unidentified man threatening to jump from elevated subway tracks in Brooklyn brought traffic to a standstill and frustrated commuters Wednesday morning.

Police closed off the roadway to pedestrians as they tried to communicate with the man. Emergency personnel were also on the scene and an airbag was deployed in case the man jumped or fell. He was finally brought down safely and sent for psychiatric evaluation. 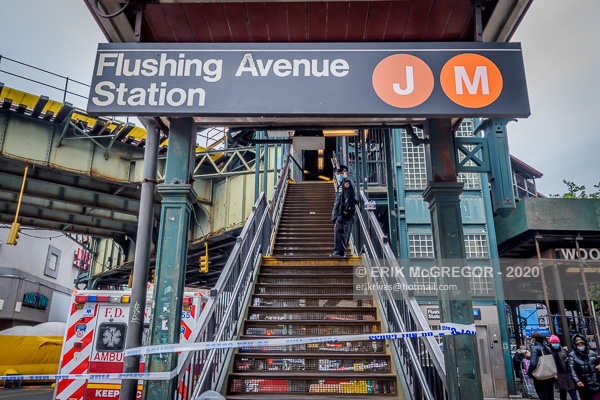