Cultural institutions play a significant role in sparking change, holding space for the complex emotions we are facing, and providing refuge. Culture gives the space to articulate our place and survival in the web of life.

XR Red Rebel brigade is part of Extinction Rebellion and has been created by XR Invisible Theatre, these ghostly-white figures cloaked in scarlet-red, drift gracefully through lines of police and crowds of demonstrators.

These mystical apparitions are the brainchild of Bristolian Doug Francisco, founder of The Invisible Circus launched as a street performance troupe in the 90s. “We used to do a lot of these statue slow motion things around Europe,” he tells me, “and they were our signature characters. But for this, I thought I’d bring it out in a different colour to represent the blood of the species.”

Each Rebel’s face is painted white, with red lips and rosy cheeks (optional), which suggests a mime troupe. Like mime artists, they work in and through silence.

Their masks are their voices, allowing the witness to see suffering, pain, judgement, destruction, indifference – whatever you want, all wrapped up as an archetype or a character in a classical Greek play.

They wear only scarlet red clothing. Red is blood, and conveys energy which, when combined with the white visage, triggers a number of potential associations, from Greek tragedy to the apparitions from a dream – or a nightmare.

The message is opaque: They are potentially frightening, but possibly uplifting, they are mythical and timeless, but in the moment. The intention, however, is clear: they are channelling the furies, and the guardians. The ancestors are warning us, trying to wake us up before it’s too late.

In art, timing is essential, and the Red Rebels have come to town at what is clearly becoming a defining moment in the history of our ecology, because red is also fire and, with the Amazon now burning, the terrible catastrophes that will likely be inflicted on us all – post-Biblical catastrophes of floods, firestorms, starvation and ultimately extinction – are becoming apparent.

This, in truth, is the “do or die” issue of our nation, of our species. Other manifestations of this proverb trivialise our real plight. They are, the blood-drenched women, silently pleading with us not to destroy ourselves. 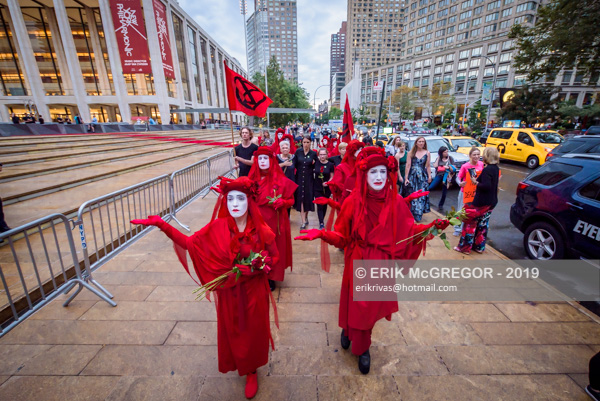