NEW YORK, NY — Over 200 New Yorkers dedicated to overdose prevention from Housing Works, Bailey House, Research for a Safer New York (RFSNY), VOCAL-NY, Harm Reduction Coalition, New York Harm Reduction Educators (NYHRE), and other members of the End Overdose NY campaign, staged a protest on August 28, 2019 at Governor Andrew Cuomo’s NYC office at 633 Third Avenue between East 40th and East 41st Streets to call the Governor out for being the single greatest barrier to enacting the evidence-based overdose prevention policies that could save the lives thousands of New Yorkers.

Thirteen participants were arrested on disorderly conduct charges after blocking the three entrances to the building for about an hour, locking arms and holding banners in an act of civil disobedience. Other protesters dropped flowers by the people risking arrest symbolizing the lives of those lost to overdose.

New York State is in the middle of an opioid overdose epidemic. More than 20,000 New Yorkers across the state have died of overdose since Cuomo became Governor, and 3,921 New Yorkers died in 2017 according to the CDC.

Evidence-based overdose prevention policies such as Overdose Prevention Centers (OPCs) and universal access to Medication Assisted Treatment (MAT) could save thousands of lives in New York State each and every year — but Governor Cuomo has failed to take action to advance these and other life-saving policy changes. Governor Cuomo has also pledged hundreds of millions in new funding to address the statewide overdose crisis that never materialized.

In May of 2018, Mayor de Blasio and other NYC political leaders endorsed a plan to open four pilot Overdose Prevention Centers in NYC, pending State approval, but the Governor has failed to sign-off on the State authorization for the two-year research pilot to be overseen by the State Department of Health.

OPCs and MAT have both been proven to reduce overdose, improve substance user health and save lives, and the main barriers to their implementation is stigma against substance users and lack of accurate information about their effectiveness.

Insite, an OPC in Vancouver, Canada, had 2,151 overdose interventions in 2017, and every intervention was a life saved. There are already 120 legally sanctioned overdose prevention centers around the world and they are proven to reduce overdose-related deaths and unsafe drug behaviors, increase the incidence of individuals seeking treatment and recovery, and reduce unsafe public use.

MAT is a proven intervention that effectively treats opioid use disorder and withholding it in any setting, including jails and prisons, is denying appropriate medical treatment.

“In 2016, I lost someone that I loved very much to an accidental overdose,” said Jose Rios, Overdose Prevention Coordinator for Housing Works. “Deena was the butter to my bread, and she was the breath to my soul. Deena’s father had just died around the time she got out of prison, and her tolerance for opioids had dropped while she was incarcerated, but she had not connected with any services that could have helped her, such as MAT or overdose prevention centers. We need to have these interventions in place. I now conduct overdose prevention trainings in her memory, and I carry Narcan with me at all times, but universal access to MAT and overdose prevention centers in New York will save so many more lives.”

“New York State currently has one of the most extensive and successful syringe exchange networks in the world,” said Ken Robinson, Executive Director, Research for a Safer New York. “However, under current law, when we give someone a clean syringe, we must send them out the door to consume their drugs – often in public spaces. We are only asking for one small additional step – that we be allowed to offer IV drug users a clean and safe place to consume their drugs, where they will be monitored by staff to prevent overdose, and where they will be offered a pathway to lifesaving services. There is nothing radical or nefarious about this. This is an evidence-based best practice and medical intervention that saves human lives.”

“Every year, we fight and plead with the Governor to implement and fund evidence-based solutions to end this devastating overdose crisis, and every year we end up with a kernel from the bottom of the barrel,” said Asia Betancourt, Community Leader with VOCAL-NY. “Governor Cuomo’s legacy of not caring about saving lives proves that he is not a progressive, nor a leader.” 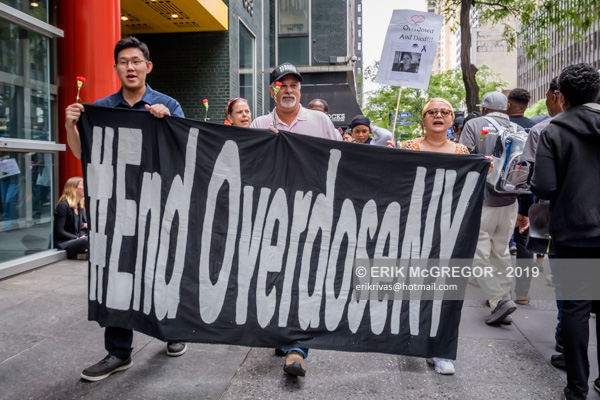