New York, NY – For the third year in a row on March 8, 2019, International Women’s Strike NYC is out in the streets reclaiming the anti-capitalist roots of the International Working Women’s Day and demanding an end to women’s job insecurity and invisibility.

Working women and non-binary people in New York City rally for a combative and festive day of action and arts to make visible the different forms of labor women perform -both paid and unpaid- usually precarious, underrated and taken for granted. They will “air the dirty laundry” through signs, banners, performances and speeches to expose working conditions in jobs.

With this aim, we will join millions of women and non-binary folks rallying, marching and picketing in Argentina, the Spanish State, Brazil, Ecuador, Mexico, Germany, Italy, among many other places, for a coordinated day of action that has become the symbol of a mass global movement.

On March 8th, working women in NYC will speak out through art and words to make visible the different forms of labor we perform, both paid and unpaid, as well as the ways in which our labor is undervalued, taken for granted, and exploited. We´ll be uplifting the current campaign of the Laundry Workers Center; the Ain’t I a Woman Campaign of home-care workers; the strike authorization process of the New York State Nurses Association (NYSNA); the struggle of Sex Workers organizations against the criminalization of their labor, among many other working women’s struggles.

We invite women workers (whether your work is paid or unpaid) to come out and #airthedirtylaundry. Bring signs that tell us what kind of work you do, the conditions under which you do it, the value it is given (both in wages and in terms of social recognition), the social importance it has, and the profit it generates to others. There will be art, music, political discussion, collective learning, and much more.

On March 8th, we call women workers to join us on the streets and #airthedirtylaundry together. What does #capitalistdirtylaundry looks like from the point of view of women’s labor? Here are some examples:

-Laundry workers doing 60 hours per week and making less than minimum wage
-Teachers with 35+ children per classroom in underfunded public schools
-Nurses attending two times the patients they can safely take care
-Women standing up in welfare lines for hours to feed their families and arbitrarily detained if they dare to sit on the floor
-Fast food restaurant workers being harassed by both managers and clients
-Hospitality workers cleaning 30+ rooms per day, without a contract or health-care benefits
-Food chain workers threaten with ICE audits if they demand basic labor rights
-Women working three jobs to be able to afford rent in NYC

Join us in New York City to respond to the international call to action with a festive and combative performance that will make visible the paid and unpaid labor of women and allow us to recognize our shared struggle. We are claiming the quintessential labor tactic of the strike to redefine what counts as “labor”; what workers’ struggle looks like; and what kind of transformations should be at the core of a truly radical feminist politics.

In the United States, where the right to unionize and bargain collectively is under attack, organized labor has been systematically decimated. However, women in care-work and feminized sectors are paving the way forward for a renewed labor movement, one with a more aggressive anti-capitalist stance and a broader scope of action. The wave of teachers’ strikes; the struggle of nurses around safe staffing; the role that flight attendants played in stopping the government shut down; the struggle of service industry workers against harassment and for a living wage; and the fight of hospitality workers to unionize and for a fair contract, are just a few recent examples.

While feminists throughout the world have been appropriating the strike as a tactic, women within organized labor are leading the struggle to transform not only their work conditions, but to demand social services, fight the erosion of the commons caused by decades of privatizations, and transform social relations at large. We cannot and will not be left behind.

Come out. Let’s join our sisters around the world and air the dirty laundry together! 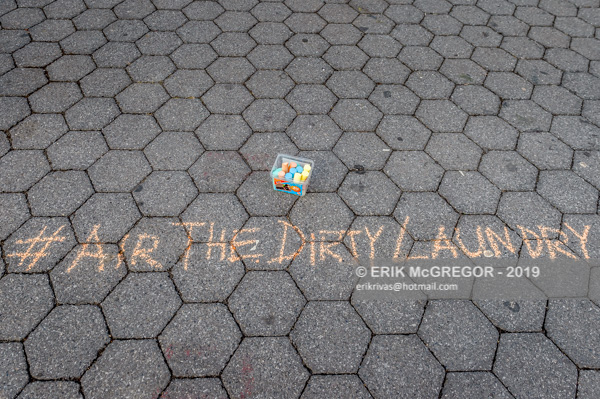