NEW YORK, NY – As global leaders assemble for the 4th Annual Climate Finance Day, New Yorkers, including representatives from environmental, community and student groups, held a rally at City Hall on November 28, 2018 and call on NYC to divest public money from banks that fuel climate change and to establish a municipal public bank to help fund the transition to a just, sustainable economy.

At the rally, Public Bank NYC, a broad-based coalition of community, worker rights, environmental, and economic justice groups, will release new findings showing nine of the largest banks eligible to hold City deposits (“NYC designated banks”) are major investors in the fossil fuel industry, including the proposed Williams Pipeline, which would carry fracked gas across the New York Harbor.

The recent United Nations report on climate change is unequivocal: rapid, dramatic changes are needed across our economy to prevent climate catastrophe. The urgency of the moment, though, demands we go much further.

The alternative is clear: We must divest from banks and other corporations with business models predicated on extraction, and invest in sustainable solutions rooted in racial, economic, and environmental justice. A public bank for NYC would support community self-determination as well as strengthen and expand community-led renewable energy projects around the City. It would be a vital step towards building a new, green economy, block by block, neighborhood by neighborhood. 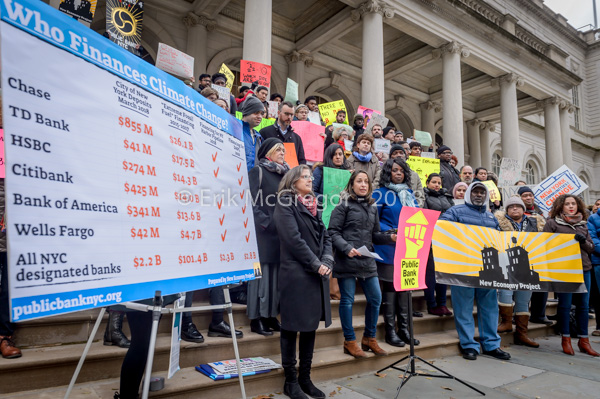