New York, NY – On the second anniversary of the attack on the Capitol, activists from Rise and Resist and allies gathered on the steps of the New York Public Library in Manhattan to demand that the Department of Justice move more swiftly to indict those most responsible.

Since the assault on the capitol, hundreds of participants have pleaded guilty or been convicted. Not one of them was a leader in the coup attempt. They are the worker bees, the cannon fodder, the Kool-Aid drinkers who took orders and committed violent crimes in service of The Big Lie that Trump won the election. Those responsible have not been held accountable.

In the past year the January 6 committee has unearthed significant evidence identifying the many powerful, well-connected individuals, elected and not, who orchestrated the assault on the capitol.

The evidence is incontrovertible, but the Department of Justice has yet to bring charges. The glacial pace has undermined confidence that there will be any legal repercussions for the organizers. It has fueled the cynical view that laws apply very differently to the privileged. And it has stirred anxiety that our democracy still isn’t safe, and that January 6, 2021 was just the beginning.

In addition to the gathering on the library steps, the Rise and Resist Indict-Mobile circulated through the city with a large screen video marking the anniversary of January 6 and highlighting the importance of the 14th Amendment in preventing coup plotters from holding office.

Throughout the day, the Indict-Mobile will be making stops at high traffic intersections in and around the city, educating the public about the 14th Amendment and calling for the former president and his traitorous co-conspirators to be brought to justice.

As more damning evidence is revealed impatience grows at the lack of action against those responsible. No one is above the law. It is time for indictments. 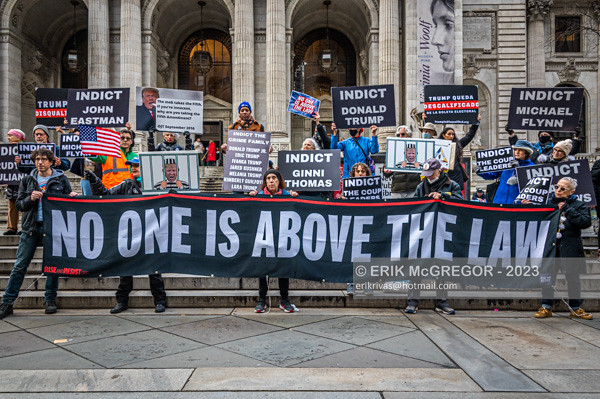