All Eyes on BlackRock Protest

New York, NY – Climate activists with Stop the Money Pipeline held a rally in midtown Manhattan on May 25, 2021 outside BlackRock’s HQ, one of the world’s biggest funders of climate destruction to urge the company to end their support for the dangerous coal projects, and stop funding fossil fuels and forest destruction.

CODEPINK organized an “All Eyes on BlackRock” protest at BlackRock’s office at 45 E 51st Street. CODEPINK has an ongoing campaign urging BlackRock to divest from all weapon manufacturers; however, this year, we also ask that BlackRock support human rights for this shareholder season.

Later in the day activists from Stop the Money Pipeline dropped heaps of coal at the doors of BlackRock headquarters in Manhattan, demanding an immediate drop on their investments in coal.

BlackRock, the world’s largest asset management company, released a statement indicating that it would like companies to implement and disclose their human rights processes to identify, manage, and prevent adverse human rights impacts.

CODEPINK highlighted three proposals about human rights and nuclear weapons filed by faith-based investors represented by Investor Advocates for Social Justice. Proposals with Northrop Grumman, Lockheed Martin, and PNC Bank will go to a vote at shareholder meetings this spring. As a top ten shareholder in all three companies, BlackRock can play an essential role in leveraging its power by voting to support these resolutions.

Even though BlackRock said it would like companies to implement human rights processes, they continue to profit from war. BlackRock even has an iShares fund that exclusively benefits from weapons of war. We call on BlackRock to hold themselves accountable and demonstrate their commitment to human rights by voting yes on the resolutions. 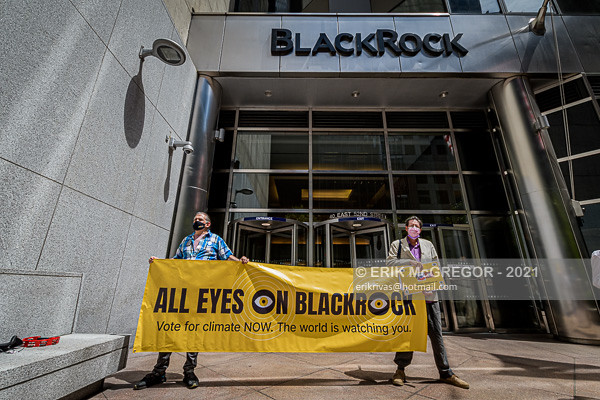