NEW YORK, NY — Activists rallied on the day of AIG’s annual shareholder meeting to demand that CEO Peter Zaffino end insurance coverage of and investments in fossil fuels. The delegation gathered outside of AIG’s headquarters with signs of the company logo amid flames, declaring “AIG is fueling the climate crisis”.

Members of Rise and Resist and New York Communities for Change called on AIG to take responsibility for its role in driving climate change. Since taking office on March 1, CEO Zaffino has not responded to the campaign’s calls to end support for the fossil fuel industry.

“AIG can’t hide in the shadows anymore, profiting off the planet’s destruction. We are shining a spotlight on AIG and demanding that Peter Zaffino stop enabling climate-wrecking fossil fuel projects,” said Cherie Acierno, Rise and Resist.

AIG is a top three insurer of oil and gas globally, and remains one of the only companies able and willing to insure multi-billion-dollar coal projects.

“Energy companies can’t build or operate fossil fuel projects without insurance. Peter Zaffino is well aware of the risks of climate catastrophe, but his company continues to prop up the very industry that is driving the crisis,” said Hannah Saggau, climate campaigner at Public Citizen. “On the day of AIG’s annual shareholder meeting, activists are calling on CEO Peter Zaffino to turn AIG into a company that prevents harm rather than fuels it.”

Activists delivered a petition with over 152,000 signatures calling on AIG and other companies to stop insuring the controversial Trans Mountain pipeline. First Nations communities have fiercely opposed the pipeline and its proposed expansion. Three of the pipeline’s insurers — Zurich, Munich Re, and HDI Global — have confirmed that they will no longer insure the project. Citing pressure from activists, Trans Mountain filed a request with the Canada Energy Regulator to keep the names of its remaining insurers secret, which the regulator granted on April 29.

AIG is also facing pressure from activists in Australia, who have mounted a similar campaign over AIG’s suspected past involvement in the Adani Group’s Carmichael coal mine and the insurance giant’s refusal to rule out covering the project. Indigenous communities have resisted the mine’s development on their lands. The mine would produce an estimated 4.7 billion tons of greenhouse gas emissions over its lifetime—equivalent to the annual emissions of almost 100 million passenger vehicles.

“The Adani Carmichael coal project will open up a massive new thermal coal basin in the midst of the climate crisis, it is being contested by Traditional Owners who have not given their consent, it is destroying endangered species’ habitat and draining precious water supplies,” said Pablo Brait, campaigner at Market Forces. “One hundred companies have now ruled out any collaboration with Adani on this disastrous project, including 36 major insurance companies. AIG is trashing its reputation by refusing to join its competitors in ruling out insuring Adani’s climate-wrecking coal mine and rail line.” 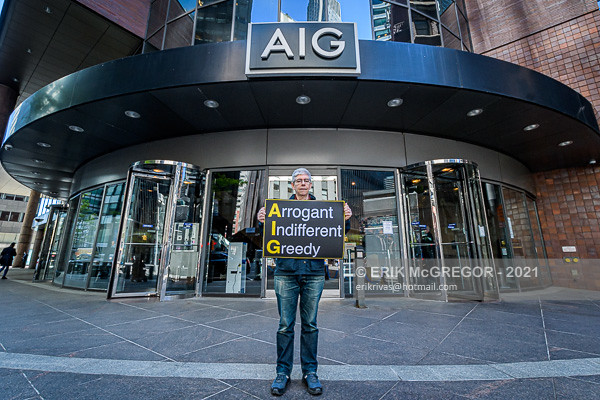 All Eyes on BlackRock Protest