NEW YORK, NY — Local climate activists, working with the Insure Our Future Network, gathered outside AIG Headquarters in Manhattan on March 1, 2021 to throw an “office warming” party complete with cake, and balloons welcoming AIG’s new CEO, Peter Zaffino–and to demand that AIG take action on climate change. Activists gave a “welcome” to incoming CEO Peter Zaffino on his first official day as CEO and kick off a new campaign demanding that he end the company’s support for the fossil fuel industry.

The delegation included leaders from 350NYC, New York Communities for Change, Public Citizen, Rise & Resist, Sunrise Kids, and XR NYC. Zaffino has, to date, not responded to requests for meetings from the organizations.

AIG is one of the world’s top-three insurers of coal, oil, and gas and remains one of the only companies willing and capable to insure multi-billion-dollar coal projects. Without insurance, these projects can’t be built or operated. Activists pointed out that coal is not critical to AIG’s business model: it represented less than 1% of AIG’s 2019 premiums. New research released last week finds that AIG is not just insuring risky coal projects, it also has US $4 billion invested in coal. AIG is also one of the few global insurers that is yet to adopt a single policy restricting its support for fossil fuels. At least 26 insurance companies globally have ended or limited their coverage for coal projects, representing nearly half the global reinsurance market. This has resulted in coal companies facing rate increases of up to 40%, and some projects struggling to obtain coverage at all. Yet AIG continues to provide a lifeline to these industries, citizen groups said.

While North American companies lag behind their global peers in terms of climate action, Liberty Mutual, The Hartford, Chubb, and AXIS Capital all have at least basic policies reducing coal underwriting. In January 2020, former CEO Brian Duperreault confirmed that AIG would continue to offer insurance to the coal industry, saying coal is “being taken out of the ground because people need it.”

“AIG loves to remind people that it was one of the first U.S. insurers to recognize climate change, but the company has done virtually nothing to address the crisis. With new leadership, it’s time for action,” said David Arkush, director of Public Citizen’s Climate Program. “Peter Zaffino knows fossil fuels are a risky investment and has warned of the risks of climate change. As the new CEO, Zaffino should turn AIG into a company that prevents harm rather than insures it.”

AIG also provides insurance for oil and gas projects with devastating environmental consequences, such as the Trans Mountain pipeline in Canada, which has already had 85 spills and faces significant resistance from Indigenous Peoples. Trans Mountain will file its annual proof of insurance with the Canadian Energy Regulator (CER) at the end of April. Last week, the company petitioned the CER to keep the identity of its insurers confidential, citing concerns that public pressure would cause insurers to drop the project, resulting in higher premiums and challenges in maintaining adequate insurance coverage.

The Indigenous youth group Braided Warriors peacefully protested AIG’s role in backing the pipeline at AIG’s Vancouver offices on Friday, February 19. They were violently removed and arrested by the Vancouver Police Department. Two youth had to receive medical treatment after being released from the hospital. Recent commitments by insurance companies to reduce their support of fossil fuels are part of a larger movement including banks, asset managers, and other financial actors. Blackrock CEO Larry Fink’s annual letters to both CEOs and clients focused on climate change.

The UN has warned that we must cut carbon pollution roughly in half by 2030 to have a reasonable chance of holding the average global temperature increase to 1.5°C, and coal remains the single largest source of that pollution. A recent study found that fossil fuels are even more harmful to human health than previously known, causing 8.7 million premature deaths annually from 2012 to 2018. 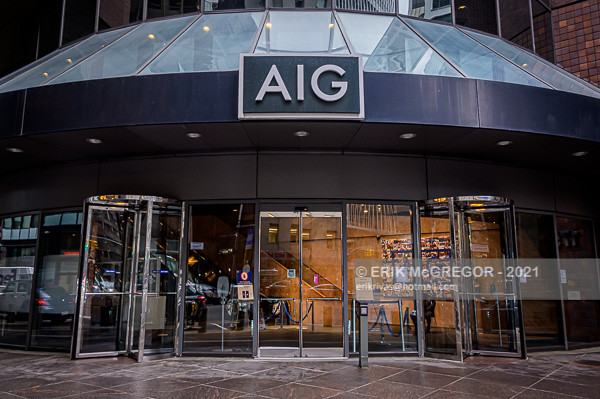