New York, NY – A group of #ClimateStrike activists dropped a banner over the entrance to the Consolidated Edison Headquarters in downtown Manhattan on September 24, 2019, with the message “Con Ed’s Rate Hike Plan Fails the Climate Test. #Climate Strike Utilities”.

This is one act in a growing movement directed at corporate utilities that are abusing their monopoly status to raise already exorbitant rates, and use that money to fund massive expansions of fracked gas pipelines, liquefied natural gas storage tanks, and other fracked gas support infrastructure throughout New York City and New York State.

Just five days after 300,000 New Yorkers and 4 million people around the world participated in the Global Climate Strikes, Governor Cuomo joined WNYC reiterating his opposition. “We have taken a position: We’re against the pipeline. That’s our position. DEC has considered it, and they are re-submitting additional information. But there’s no negotiation. If they’re extorting people, and wrongfully turning off gas service to homes to create political pressure, I’m not negotiating over that. That’s extortion. That’s a crime.” regarding the Williams NESE pipeline and the corporate utility extortion abusing their monopoly status. 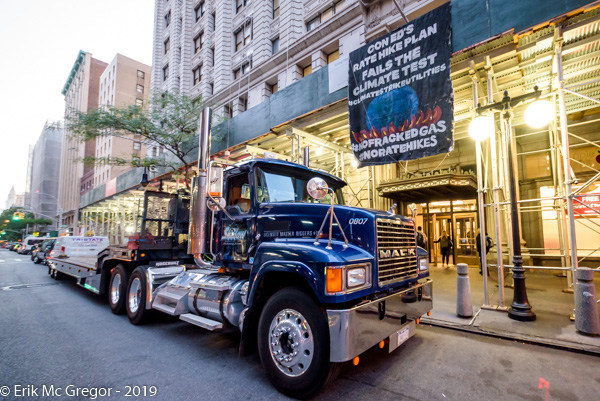