New York, NY – Members of the NYC activist group Rise and Resist held a demonstration in front of the U.S. Courthouse in Foley Square to demand the release of Trump’s financial records on August 23, 2019, the day Trump’s lawyers (Consovoy McCarthy Park) appeared again to represent the Trumps and Trump Organization in the Southern District Court of New York trying to prevent Deutsche Bank and Capital One from complying with subpoenas issued by the US Congress House Committees.

The Congress and the public have a right to know! We will be protesting outside while Trump’s lawyers argue their case.

On Friday, August 23rd, Trump’s lawyers (Consovoy McCarthy Park) will represent the Trumps and Trump Org. in the Court of Appeals for the Second Circuit.

They will try to prevent Deutsche Bank and Capital One from complying with “friendly” subpoenas from the House Permanent Select Committee on Intelligence and the House Committee on Financial Services.

The House requested the information to follow up on allegations of money laundering, bank fraud, and tax fraud.

Filing this appeal, to prevent compliance, is part of Trump’s pattern of refusal to comply with requests for information about his finances and his taxes.

He is refusing to recognize the right of the House of Representatives to hold hearings and have oversight. This is a direct challenge to the checks and balances of branches of the government. We are in a Constitutional crisis. 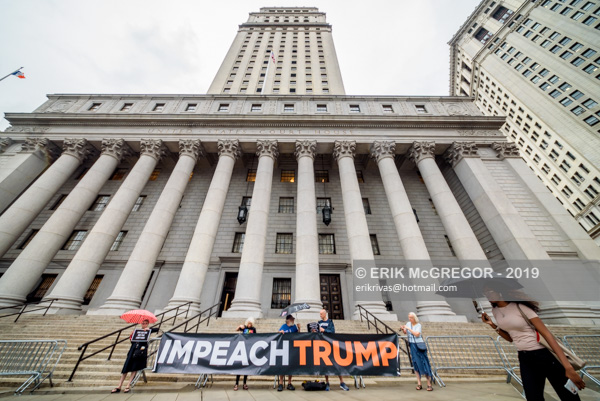