New York, NY – The Progressive Caucus rallied with the Black, Latino/a, and Asian Caucus Council Member (BLAC) and the Drug Policy Alliance outside City Hall on February 13, 2019 to mark the introduction of legislation and resolutions to voice their support for legalization, reduce the collateral consequences from marijuana criminalization, and promote policies that prioritize the inclusion of communities most harmed by marijuana criminalization.

The City still penalizes New Yorkers for usage and possession of marijuana – jeopardizing New Yorkers’ access to housing, child custody, and employment. The package addresses some of these collateral consequences of marijuana prohibition, and is supported by Legal Aid, Bronx Defender Services, Citizen Action of New York, and Communities United for Police Reform.

This package and the sustained advocacy by the Progressive Caucus is especially important as legalization is being discussed and negotiated on the state level, as any plan to legalize marijuana in New York must include the sealing of records, create a diverse and inclusive industry, and use revenue to reinvest in communities that have been impacted by prohibition.

“It’s not often a policy idea presents itself that in one fell swoop can undo decades of economic, racial, and social injustices all at once. But that’s exactly what the State of New York can achieve by legalizing the adult use of recreational marijuana,”said Council Member Carlos Menchaca, Vice-Chair of the Progressive Caucus. “We know that marijuana consumption is safe and provides several medical benefits. We also know that its criminalization actually criminalized communities of color and racialized the drug war. That is why the only morally justifiable way of legalizing marijuana must come with a plan for funneling economic gains directly into these affected communities and expunging related criminal records. I’m proud to stand with so many of my colleagues in the City Council to show State Legislators the way forward.”

“The prohibition of marijuana has subjected low-income communities of color to targeted and disproportionate policing and enforcement, the effects of which have been devastating for individuals and entire communities,” said Council Member Antonio Reynoso, member of the Progressive Caucus. “Today I introduced a bill that would require Administrative Child Service Council Member ACS to report on how many child welfare investigations are initiated as a result of Health and Hospitals drug screenings. This information is critical to expose the impact the war on drugs has had on mothers, children, and families. I am proud to be a part of the City Council and Progressive Caucus’ push to undo decades worth of collateral damage and pave a path towards an equitable marijuana market.”

“With marijuana legalization in New York State inching ever closer, we must not make the mistakes of states that came before us. We need to prioritize the needs of communities most harmed by marijuana criminalization within the framework of a new cannabis economy. That’s why I’m proud to stand with the New York City Council’s Progressive Caucus as we introduce our marijuana justice legislative package, which includes my resolutions calling for reforms to how our healthcare system treats legal marijuana,” said Council Member Carlina Rivera, member of the Progressive Caucus.

“We need to be creating more access points for employment, not less- and as we move toward legalization, it makes absolutely no sense that we’re keeping people from finding jobs or advancing their careers because of marijuana use,” said Council Member Jumaane Williams, member of the Progressive Caucus. “I’ve long advocated for legalization and the expunging of records, and this measure is in line with those goals. This legislation, like the Fair Chance Act before it, is good for both employers and prospective employees- it expands the pool of applicants by preventing people from being shut out for no reason. I want to thank the Progressive Caucus for their support of this legislation, and for their work on a number of measures that will reform the way we treat marijuana, both as we move toward legalization and into the next phase.”

“Given New York’s appalling history with racially biased marijuana enforcement, we must be bold and innovative in creating justice and equity. The package introduced today is wide-ranging and responsive to the calls for cities to look at steps they can take to address the harms of marijuana criminalization even ahead of the state moving on legalization. Communities cannot wait,” said Kassandra Frederique, New York State Director of the Drug Policy Alliance.

“The measures introduced by​ the Progressive Caucus along with the Black Latino and Asian Caucus truly center the communities most harmed by biased marijuana enforcement. By directly addressing the heavy collateral consequences attached to marijuana arrests, prioritizing the expungement and vacatur of prior convictions, and emphasizing the need for community reinvestment, the caucuses understand the racial and economic justice issues involved with marijuana criminalization.”​ Anthony Posada, Community Justice Unit Supervising Attorney, Legal Aid. 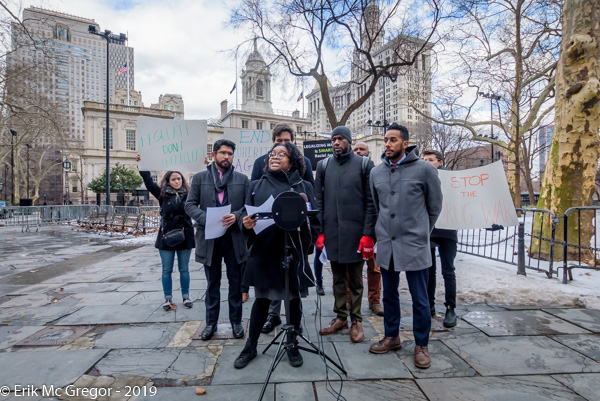