New York, NY – Thousands of New Yorkers took to the streets of Manhattan to participate on the Reclaim Pride Coalition’s (RPC) fourth annual Queer Liberation March, where no police, politicians or corporations were allowed to participate. This year the march highlighted Trans and BIPOC Lives, Reproductive Justice, and Bodily Autonomy.

The Reclaim Pride Coalition’s comes shortly after the bombshell announcement that the Supreme Court overturned Roe v. Wade. Organizers say they hope the emphasis on trans lives in the context of reproductive justice will encourage marchers to look beyond just reinstating Roe v. Wade.

“Trans people in this country have been under consistent, appalling attacks for years, and we need the LGB community to finally show up for their trans siblings. We cannot be standing on the sidelines while states like Alabama are criminalizing trans healthcare and Texas is attempting to criminalize parental supervision of their trans childrens’ care” said Leah Entenmann, an organizer with RPC.

At a recent town hall hosted by RPC, attendees noted that Roe was always insufficient in actually ensuring provision of the necessary healthcare it protected. Many said they wanted a positive affirmation of the right to healthcare, especially for trans and Black, Indigenous, and People of Color (BIPOC), who traditionally face legal and economic barriers to basic care. They also hope the emphasis on queer, trans, and BIPOC people will remind others that reproductive justice is not just for straight, cisgender white women.

“So much of the abortion rights community is focused strictly on cisgender women, but young LGBTQIA2S+ people also deserve the right to privacy and safe abortion access – in impoverished communities as much as in rich communities. Many of those people are trans men or non-binary people, and their concerns are just as real as any cisgender woman’s. Especially considering all of the bans on trans kids in sports and now making trans healthcare outright illegal. It’s impossible to decouple this SCOTUS decision from ongoing attempts to control the bodies of anyone who isn’t cisgender, white, and male,” said Paul Nocera, bisexual RPC organizer since 2019.

Experts have noted the impact this decision would have on not just reproductive rights, but on all of the decisions that relied on the precedent of Roe v. Wade and the constitutional right to privacy it supports, including landmark cases Lawrence v. Texas and Obergefell v. Hodges, which made anti-sodomy laws unconstitutional and granted same-sex couples the right to marry, respectively.

“Now is the time for us all to fight together. If we don’t fight together, we’ll die together,” said Janis Stacy, who is a trans-identified Native Two Spirit. “Even before this SCOTUS decision, trans people have been denied life saving medical treatments for years. We were told that we aren’t full people. These are life and death issues for many of us. We need our siblings in the LGB community to stand up for us now, because they are coming for you next.”

The Queer Liberation March for Trans and BIPOC Freedom, Reproductive Justice, and Bodily Autonomy will start in Foley Square and march north up 6th Avenue to Washington Square Park for a community gathering.

Since the first Queer Liberation March in 2019 the annual event has grown to attract nearly 50,000 marchers every year. It is now the largest LGBTQIA2S+ protest in New York City.

As in the last three years, this is a peaceful people’s march with no regimented contingents, no corporate sponsors, and neither NYPD control over decision making nor uniformed police marching.

The Queer Liberation March revives the goals and spirit of the original Christopher Street Liberation Day March in 1970, born out of the 1969 Stonewall Uprising: social justice, freedom, and access for all! 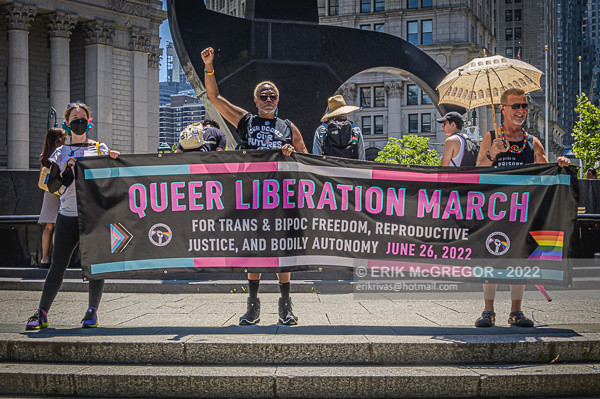