Last May, the Biden administration announced U.S. support for a temporary waiver of international intellectual property rights for COVID-19 medicines by the World Trade Organization (WTO) –the TRIPS Waiver– but the U.S. has done little yet to bring that about in the face of staunch opposition from the EU, UK, and Switzerland who are protecting the industry. Meanwhile, over 120 nations, led by South Africa and India, have been pushing for the WTO to adopt the waiver.

While affluent countries are issuing third- and fourth-dose COVID-19 boosters, only about 13% of people in low-income countries have received even a first vaccine dose, resulting in preventable deaths and leaving the world vulnerable to the next disruptive wave of variants. The increased global demand for booster shots and new vaccine formulas have only increased the need for additional vaccine and treatment production.

Earlier this week, it was announced that 6 million people around the world have died from COVID-19, with nearly 1 million of them here in the U.S. Many of these deaths could have been prevented had it not been for Big Pharma’s obstinance that has contributed to the emergence of the deadly delta and omicron variants.

The die-ins and rallies, taking place in the Americas, Europe, Africa, Asia and Australia, call on world leaders, including those in the U.S. and the EU, to immediately waive intellectual property rules standing in the way of increased vaccine and treatment production. 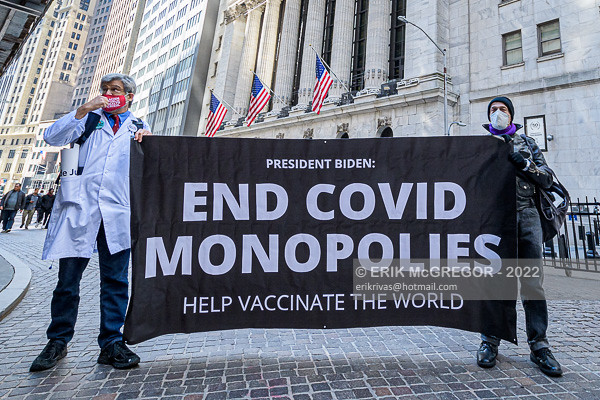