New York, NY – In preparation for global celebrations to mark the first-year anniversary of the Treaty on the Prohibition of Nuclear Weapons (TPNW) entry into force, activists with New York International Campaign to Abolish Nuclear Weapons (NYCAN), Rise And Resist, International Campaign to Abolish Nuclear Weapons (ICAN), Youth Arts New York/Hibakusha Stories, Peace Action New York State, The Manhattan Project for a Nuclear-Free World, and The Illuminator Collective projected images on the south wall of the Secretariat Building of the United Nations in New York on January 19, 2021 with messages calling on nuclear armed nations to join the TPNW, which became international law one year ago, on January 22, 2021.

The illuminations projected on to the UN, designed by artist Ivy Arce, called out each of the nine nuclear armed nations, in the order in which each country developed its nuclear capability, to join the TPNW. The messages read, “Nuclear Weapons Are Illegal, United States Join the Treaty! #nuclearban” followed by Russia, the UK, France, China, Israel, India, Pakistan and North Korea; and were conveyed in the corresponding country-specific, lingua franca to send a direct message to their leaders — join the Treaty to save the world from nuclear annihilation.

The Treaty on the Prohibition of Nuclear Weapons comprehensively and categorically bans nuclear weapons and associated activities, including nuclear weapon use, threat of use, testing, development, production and possession. It establishes positive obligations to assist victims of nuclear weapons use and testing, to remediate contaminated environments and recognizes the importance of peace and disarmament education. The TPNW explicitly frames nuclear weapons as “abhorrent to the principles of humanity”, contrary to international humanitarian law, as well as a threat to human rights, the environment and global economy. It also emphasizes the disproportionate impact of nuclear weapon use and testing on women and girls, and Indigenous peoples.

Echoing New Yorkers’ demand for nuclear abolition, today, the Bulletin of the Atomic Scientist unveiled the timing of its Doomsday Clock. It is 100 seconds to midnight. According to the press statement, “the

Clock remains the closest it has ever been to civilization-ending apocalypse because the world remains stuck in an extremely dangerous moment…. [The] decision to keep the Doomsday Clock at 100 seconds to midnight is a clear warning to the world: We need to back away from the doorstep of doom. Immediate, practical steps to protect humanity from the major global threats that we have outlined are needed.” The Bulletin describes such threats, in addition to nuclear catastrophe, as the continued advancement of climate chaos without an effective global response, as well as threats to our national security, both external and internal, citing the Capitol insurrection of January 2021.

The demand for nuclear abolition continues to reverberate around the globe. With 59 states parties to the Treaty and more joining at a pace unparalleled in recent arms control and disarmament fora, the TPNW offers a roadmap for the total elimination of nuclear weapons. In a bold local move, the New York City Council recently passed progressive and comprehensive disarmament legislation in the final week of its 2021 legislative session. Council Member Danny Dromm’s legislation calls upon Comptroller Lander to instruct the pension funds of public employees in New York City to divest from and avoid any financial exposure to companies involved in the production and maintenance of nuclear weapons, reaffirms New York City as a Nuclear Weapons Free Zone and calls on the US Government to sign and ratify the TPNW.

The sponsoring New York City based organizations, in collaboration with artists Ivy Arce and Amber Cooper-Davies together with The Illuminator Collective, joined the effort to remind New Yorkers of the daily risk we live with, as our beloved city is a prime target for nuclear weapon use by accident or by design. It also recalls our responsibility as the hub for early innovation and testing which led to the disastrous Manhattan Project that weaponized the splitting of the atom and opened the door to the nuclear age.

Robert Croonquist, NYC pension holder and NYCAN member said, “I spent my entire career teaching New York City youth how to contribute to a more peaceful and sustainable future. It is unconscionable that my pension invests in their destruction. I am therefore thrilled that Comptroller Lander is working with us to divest New York City’s pensions and finances from nuclear weapons production.”

Setsuko Thurlow, an atomic bomb survivor who accepted ICAN’s Nobel Peace Prize and has met thousands of NYC youth through the Hibakusha Stories initiative of Youth Arts New York, said, “Listening to my personal story, as a 13-year-old school girl who survived the indiscriminate massacre that destroyed my beloved Hiroshima, the youth of New York City understand that humanity and nuclear weapons cannot co-exist. I’m therefore thrilled to hear about City Council’s comprehensive legislation that divests from nuclear weapon producers and creates community engagement to take action for disarmament. I hope such local laws will be replicated around the world.”

“New York City is where the nuclear age began. From the halls of Columbia University, to uranium storage facilities in Manhattan, Staten Island and Queens, there still exist Manhattan Project sites in NYC that may require further remediation; many are in marginalized communities of color,” Dr. Kathleen Sullivan, Director of Hibakusha Stories, that has brought atomic bomb survivors into the lives of some 40,000 NYC high school students, stated.

“We demand that our resources be used for human needs and environmental protection. We reject the proposal that more than one trillion tax dollars are currently promised over the next ten years for nuclear weapon development,” said Dr. Emily Welty, Director of Peace and Justice Studies at Pace University.

Seth Shelden, United Nations Liaison for the International Campaign to Abolish Nuclear Weapons (ICAN), said: “In its first year of law, the TPNW has seen more countries join (now totaling 59), more countries register support (now totaling 138 ), more financial institutions exclude nuclear weapons companies from portfolios because of the TPNW (now representing $3.9 trillion in assets), and more cities call on their governments to join the Treaty (now totaling 524, with New York City signing on last month). According to this week’s Doomsday Clock release, the risk of nuclear catastrophe remains as high as it has ever been. It is as good a time as it has ever been for all countries to join the TPNW.”

“It is an undeniable fact that the world has become more dangerous under decades of nuclear deterrence policy,” said Mari Inoue, an attorney and co-founding member of Manhattan Project for a Nuclear-Free World. “Nuclear weapons must never be used again, against any nation, under any circumstances.”

Brendan Fay, Irish disarmament advocate, filmmaker and NYCAN member, said “The Biden-Harris Administration needs an about-face on nuclear weapons policy. As New Yorkers, we are sending a message loud and clear — for the sake of the earth and a future of hope we do not support nuclear weapons use or threat of use and urgently need to redirect federal funds to mitigate the on-going COVID 19 pandemic, climate chaos, systemic racism, and to instead support healthcare, housing, education and ecological justice.”

“The message on the side of the United Nations that ‘Nuclear Weapons Are Illegal’ needs to emblazoned all over until every nuclear weapon is dismantled and the world can see there is a path to common security and cooperation where we solve our challenges together,” said Sally Jones of Peace Action New York State. 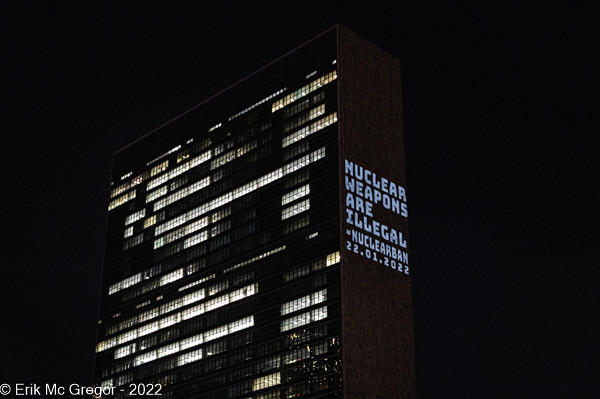