New York, NY – Hundreds of New Yorkers still reeling from the effects of Hurricane Ida, marched to Citigroup Headquarters and the NY Federal Reserve on October 29, 2021 to demand two of the city’s iconic financial institutions stop the pipeline of money flowing to the fossil fuel industry. The actions were part of a day of international escalation with disruptions targeting financial institutions in 50 cities on six continents to protest the role of the financial sector in fueling the biggest threat to global financial security: climate change.

In concert with six other actions at Federal Reserve locations across the country, the New Yorkers also turned their attention to the New York branch of the Federal Reserve, calling on the Biden Administration to replace Fed Chair Powell. Because Chair Powell has failed to use the mandate of his position to take substantive action on climate, The Fed lags behind central banks in Europe, who are beginning to place necessary restrictions on risky investments in the fossil fuel industry.

The group targeted Citigroup for its outsize role in propping up the fossil fuel industry: it is the industry’s second largest funder after JP Morgan Chase. It is also the biggest US investor in coal.

Rachel Rivera, Superstorm Sandy survivor and member of New York Communities for Change: “The Fed, Citibank and other banks must stop funding fossil fuels. My family lost everything in Sandy. We’re still hurting. On today’s anniversary, just before Glasgow, I’m here to say New Yorkers demand a better future, and these Wall Street giants should do the right thing. They need to stop torching our planet.”

The actions in New York were undertaken in coordination with youth climate leaders, mobilizing for a Fossil Free Future and with a larger global mobilization to Defund Climate Chaos, all of which are calling out financial institutions on the eve of the UN climate talks in Glasgow, which commence Sunday.

Events in NYC started with a rally at the foot of the Brooklyn Bridge. Demonstrators proceeded to the Federal Reserve, where among numerous other speakers, NYC Comptroller Scott Stringer gave a fiery speech about the need for the financial industry to take responsibility for its investments. The group then marched to Citigroup’s headquarters, where a rally ensued.

It is a key mandate of the Federal Reserve to assess and account for risks to the U.S. economy. Marchers called on The Fed to fulfill that mandate and keep its word to account for climate risk. Data released today shows the Fed is continuing to slip, falling to 14th place behind India and retaining a “D-” grade, according to the UK-based think tank Positive Money.

Today also saw corresponding actions at six other Fed branches across the country, including in Washington, Chicago, and Denver.

Banks like Citigroup and Chase continue to expand tar sands, coal, and oil and gas extraction and deceive the public about the reality of the climate crisis. Citigroup alone poured over $237 billion into the fossil fuel sector between the years 2015 and 2020.

Climate leaders nationwide, led by frontline youth activists, rose up in 39 separate mobilizations today to disrupt the pipeline of money from banks to fossil fuel projects. The US actions accompanied many around the world, targeting financial institutions of every kind.

In San Francisco, activists are targeting BlackRock and the SF Fed, while in 13 countries in Africa, people opposed the funding of proposed pipelines in Tanzania and Uganda and collapsing pipelines in Mozambique.

The 12 actions in the UK included one in London, in which activist Greta Thunberg joined hundreds protesting the relationship of Standard Chartered to the fossil fuel industry.

There were 27 actions across Germany, 40 in Canada, as well as actions in The Philippines and Brazil and across Europe aimed at banks, asset managers, central banks, and other funders of the fossil fuel industry. 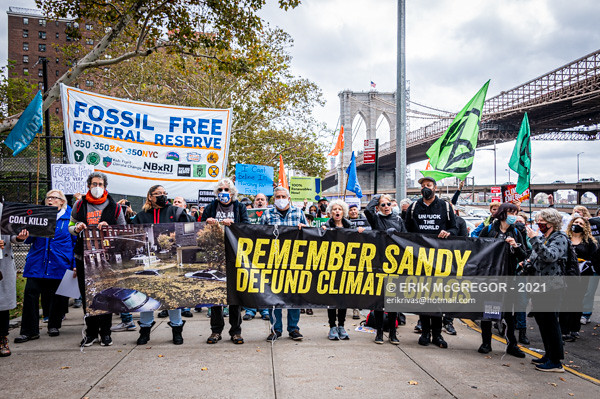