New York, NY – On September 28, 2021 Rise and Resist’s Truth Tuesdays activists gathered in the public space in front of Fox Headquarters in Manhattan, to protest the network’s ongoing propagation of dangerous climate lies.

Fox is known for broadcasting disinformation with a decidedly right-wing slant. Weekly Truth Tuesdays highlight the causal connection between dissemination of biased misinformation and the many crises that the country is facing: domestic terrorism, election insecurity, abortion attacks, systemic racism.

The protesters’ goal is to connect the dots between lies of the Fox agenda and the tragic outcomes they cause for the people who believe them.

The focus of of this Truth Tuesdays was focused on climate disinformation. Fox has consistently denied climate change, climate science, and even the climate chaos exploding right now all around them.

The 25-year agenda of denial has contributed enormously to blocking the implementation of earth-preserving climate policies.

Protesters highlighted the connection between Fox’s aggressive spreading of climate untruths and the wildfires, floods, and drought that dominate the news on other networks.

Members Extinction Rebellion NYC joined protesters from around the city to chant, hold signs and banners, distribute flyers, and wield noisemakers to decry the Fox disinformation. 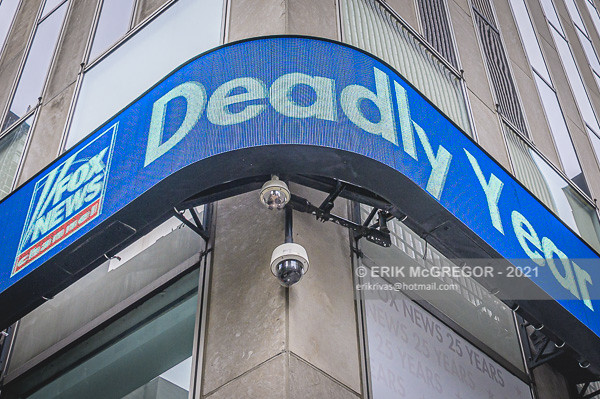