New York, NY – Dozens of animal liberation activists with the grassroots animal rights network Direct Action Everywhere (DxE) disrupted business as usual inside Whole Foods, a business owned by Amazon, staging a die-in at the meat department on November 8, 2019 in order to bring attention to a proposed Animal Bill of Rights known as Rose’s Law.

Animal Liberation activists staged the action in the midst of a growing global movement to raise awareness about Rose’s life, the chicken that inspired the Animal Bill of Rights and the deaths of billions of other animals by disrupting the business practice/consumption responsible for these deaths, in an effort to restore the individuality to the animals being sold as flesh.

Last year, activists with Direct Action Everywhere rescued 10 baby chickens from an Amazon factory farm in Petaluma California. Police “confiscated” and killed 9 of them, but allowed activists to carry one of them, later named Rose, to safety.

Rose was the lucky chicken baby that was being rescued in September, Her rescue, and her recovery, inspired a movement demanding the passage of Rose’s Law, an Animal Bill of Rights.

Decades of work in the animal welfare movement have provided little relief for animals. In fact, due to new industrialized methods, the number of animals suffering from human tyranny is greater than ever. Asking for reforms and improvement in treatment isn’t enough.

Science tells us that nonhuman animals are sentient, and justice demands that all sentient beings be protected from tyranny and oppression. For the past few centuries, we have been expanding our conception of who deserves our care, but we recognize that nonhuman animals still have no appropriate legal protections.

We ask that you support legislation giving all sentient animals :

A bill of rights enshrines the clear and absolute rights a group should have. It defines what is permissible and what is not. It illustrates a path forward and the world we want to create. Asking for Animal Liberation or Empty Cages isn’t clear. Animals need legal protections. Animals need inalienable rights. Animals need a Bill of Rights. 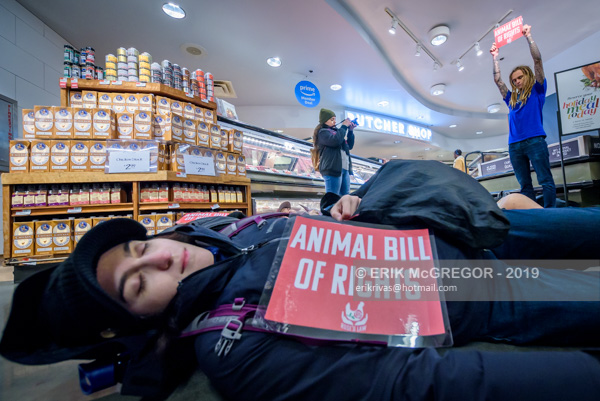