The report, which assesses major asset managers’ 2019 shareholder votes at U.S. companies, found that BlackRock and Vanguard blocked at least 16 key climate resolutions at fossil fuel and energy companies, including at Duke Energy which generated more electricity from coal than any other U.S. utility according to the most recent data.

“BlackRock manages over $6.8 trillion. It could be the leader that shows the business world how to invest in a livable future, but it is not even taking the most basic action of voting for the climate resolutions that could help hold energy and fossil fuel executives accountable,” said Billii Roberti of Mothers Out Front. “We are witnessing climate disruption now; wildfires, melting glaciers, horrific storms, massive flooding, and terrible drought. How much more do we need to see before BlackRock recognizes that we are in the midst of a climate emergency, and that it must become part of the solution?”

Over the last two decades asset managers have become the backers of the global economy. The 25 companies assessed in CLIMATE IN THE BOARDROOM: How Asset Manager Voting Shaped Corporate Climate Action in 2019 collectively manage $38 trillion. As the world’s largest asset manager BlackRock owns significant percentages of the fossil fuel and energy sector, giving it huge influence over these companies. Yet despite CEO Larry Fink’s rhetoric on corporate responsibility, the report shows that BlackRock continues to block efforts to push large energy, fossil fuel, and auto executives to take concrete action on climate change.

“BlackRock’s economic power drastically impacts whether or not we mitigate a climate catastrophe. Right now, BlackRock is financing the climate crisis by investing in coal, oil, gas, and the companies driving deforestation. Furthermore, it is not supporting climate resolutions or setting clear consequences for companies that refuse to act on climate,” said Esther Feldman, a youth climate activist with the Sunrise Movement. “As long as BlackRock continues to make these decisions, it is greatly contributing to the disasters my generation is facing. We see BlackRock’s voting record and will not allow Larry Fink to hide behind his excuses any longer.”

In Boston demonstrators gathered outside the local BlackRock’s offices in the morning and passed out mock report cards showing how BlackRock is falling short on climate action to employees going into the building. In New York City demonstrators gathered with signs outside BlackRock headquarters and passed out mock report cards as speakers talked to the crowd about the report’s findings and what BlackRock could be doing to lead on climate change.

“My family lost everything in Hurricane Sandy here in New York City, and then in Puerto Rico with Hurricane Maria,” said Rachel Rivera, a Sandy survivor and member of New York Communities for Change. “BlackRock and its CEO, Larry Fink, must stop financing the climate crisis or millions more people like me will lose everything.” 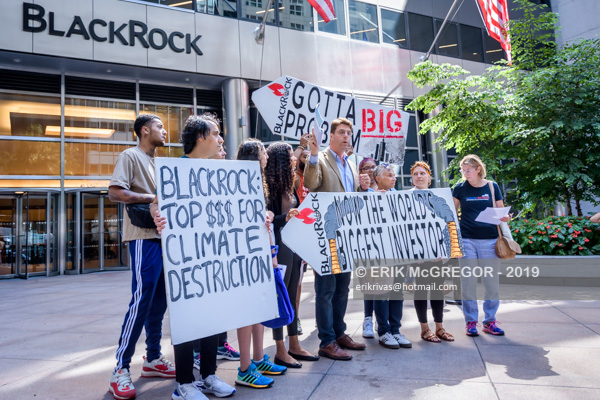