New York, NY – Hundreds of Animal Liberation activists targeted the gruesome fur trade with a mass march on August 24, 2019. The foot-to-pavement action began at the Flatiron Building, a well trafficked and highly visible area amongst the popular of New York City.

From there, the march took the city streets and made its way to the campaign’s lead targets and financial profiteers from animal abuse and torture, Canada Goose (101 Wooster Street, its only physical storefront in the United States) and Dolce & Gabbana (155 Mercer Street) where mass protests were held to stand in solidarity with the innocent animal lives brutally lost for the sake of the latest fashion trend.

The organizers used a digital billboard truck displaying graphic slaughterhouse footage, graphic posters and creative costumes, and loud chants to show the public the results of our society’s brutal treatment of animals — the 100 billion animals who are killed every year in the U.S. for food, their fur and skins, laboratory tests, and entertainment.

Animal rights activists such as Robert Banks, Lisa Epps, Rachel Ejsmont among others as well as members of groups such as SURGE UK, People for the Ethical Treatment of Animals (PETA), and other advocacy organizations, voiced immutable opposition to the horrific fur trade, denouncing the confinement, torture and extraordinarily brutal extermination of innocent beings – all in the name of fickle “luxury” and transient, superfluous “fashion”.

A couple hundred added their voices to a burgeoning group of energetic animal activists whose prime directive is to elevate public awareness about the plight of innumerable defenseless foxes, minks, raccoons, dogs and cats and other mammal victims of the gruesome fur trade, who are violently and systematically removed from their natural habitats, corralled into inescapable death camps, crammed into tiny, filthy cages for months in ALL weather conditions, beaten, stomped on, anally electrocuted, gassed, bludgeoned to death, even SKINNED ALIVE so that affluent first-world consumers can gleefully, obliviously parade around, morbidly draped in the skins that are, quite literally, ripped off these animals’ backs as they helplessly writhe in overwhelming shock and agony ’til the final throes of death overtake them. These pathetic, skinless creatures will often suffer in mortal agony for minutes or hours – all for vain, pretentious, human notions of “luxury apparel” and “fashion.”

These groups run an ongoing campaign to STOP this insanity and work toward the total abolition of the global fur industry, making a vocal, public impact for the animals trapped and languishing in this insidious death trade, and to send a meaningful message to the heartless people who line their pockets with blood and entrails, who build their posh castles with the unspeakable screams of terror and suffering from countless innocent beings.

Activists take the empowering feeling of resistance and make it infectious as they flood the city streets to bring attention and awareness to the incredibility cruel fur trade.

With a goal to educate the public of something hidden from the headlines and obligate everyone take notice of the torture and mass killing of animals for wearable garments, seeing to completely eradicate the use of real fur in the fashion industry and empower the community.

Immediately after the march, hundreds of marchers held loud protests at NYC’s Canada Goose and Dolce & Gabbana stores in the city’s biggest-ever anti-fur protests, as part of a global campaign to ban fur from retailers and New York City, where councilmembers are deliberating on a fur ban.

Because companies like Canada Goose, Dolce & Gabbana and other well-stitched labels are preparing to contract kill, torture and profit from another thousand animals tomorrow, it is imperative to ACT NOW; despite having faced threats, tickets and arrest from the New York City Police Department, The Department of Environmental Protection (DEP) and neighborhood occupants.

All of which have been brought to the attention and are under investigation of civil rights violation attorneys and outlets. The DEP claims that the use of vocal cords registers above the ‘allowed decibel level’ and uses the fear of punishment to try to repress basic amendment rights, like that of freedom of speech.

Through pressure, resistance and a demand for liberation, major cities including Toronto, London and New York City’s anti-fur campaign- the Animal Liberation Movement will continue to swarm the streets every snowy season.

“Canada Goose should be ashamed of themselves to stand so proudly behind a label of torture and abuse”, animal advocates proclaim. “This march and protest is about showing that the grassroots movement has the capacity to shut the fur industry down.” 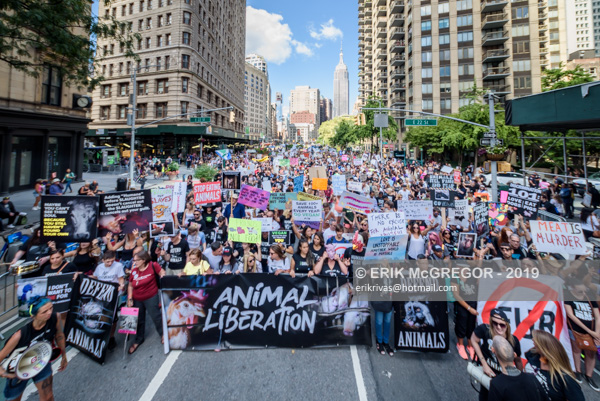