New York City – Protests against Chase Bank for its role as the world’s worst funder of climate change escalated once again as climate activists erected and scaled a two-story, steel tripod structure, blocking 47th St at Madison Ave, in front of Chase’s new flagship global corporate headquarters on May 16, 2019. One arrest was made shortly after 10:30am while a group of supporting demonstrators chanted and displayed banners calling on Chase to end its massive funding of fossil fuels.

Today’s demonstration takes place as Chase executives, Board and shareholders prepare to gather for Chase’s Annual General Meeting in Chicago on May 21st, where a broad coalition of groups will deliver an open letter to Chase CEO Jamie Dimon signed by hundreds of Indigenous, environmental, human rights and climate justice organizations.

“At this history-defining moment when the world’s leading scientists are issuing stark warnings about the fundamental threat to civilization and life on earth resulting from human-caused climate chaos, it is totally unconscionable that Chase Bank continues to pump hundreds of billions of dollars into perpetuating and expanding the fossil fuel industry,” said Laurel Sutherlin with Rainforest Action Network. “Chase is directly responsible for endangering the future livability of our planet and must be held accountable to do its part to defund the dangerous dirty energy economy.”

JPMorgan’s volume of finance for fossil fuels 2016-2018 is a shocking 29% higher than the second placed bank, Wells Fargo. The bank stands out even more from its peers in its volume of financing for the top companies expanding fossil fuel extraction and infrastructure: since the Paris climate agreement, JPMorgan Chase’s $67 billion in finance for the expanders is fully 68% higher than that of Citi, in distant second place.

“We are in emergency mode and our disruption of daily life is to show it,” said Gregory Schwedock, a founder of the New York chapter of Extinction Rebellion. “Business as usual is a luxury that no longer exists for JPMorgan Chase, Jamie Dimon or any of us.”

The action also follows a blitz of demonstrations across the country targeting Chase Bank; from Seattle where protestors shut down 44 Chase bank branches, to Boulder, where activists staged a “die-in” at the regional branch, to New York City, where protestors unfurled a 30ft. banner in front of Grand Central Station directly across Chase’s headquarters. 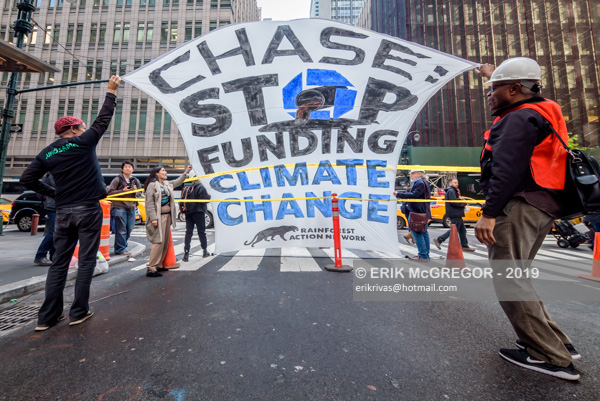