New York, NY – Members of the activist groups Truth Tuesdays and Rise and Resist gathered on January 17, 2023 at the weekly FOX LIES DEMOCRACY DIES event outside the NewsCorp Building at 1211 6th Ave.

Activists are pushing back against Rupert Murdoch’s right-wing propaganda machine, as Fox News continues their campaign to spread misinformation about the outcome of the 2020 Presidential election, and the January 6 insurrection.

What’s Fox’s biggest, most harmful lie? That it’s “Fair and Balanced.” Fox is not just right-leaning—it has actually TIPPED the balance in the GOP to MAGA right-wing extremism.

As Juliet Jeske of Decoding Fox News wrote: Fox has played “a definitive role in the radicalization of the Republican Party.” Fox is poisoning millions of American minds.

Fox viewers believe they are hearing the “fair and balanced” truth. But they are fed a selective set of skewed facts and outright lies. Fox is extremist GOP propaganda; not news. FOX HURTS AMERICA 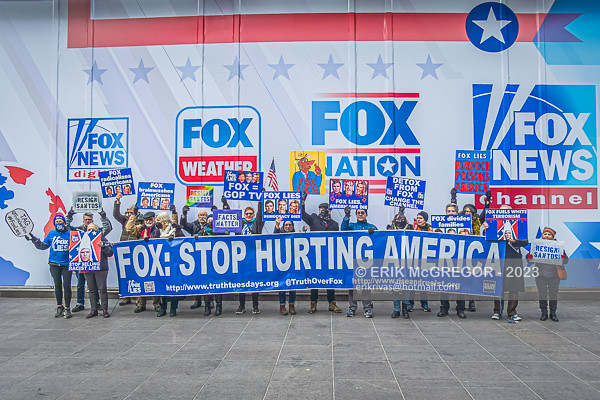