BRONX, NY – On December 8, 2022 members and leaders of the Professional Staff Congress – the union representing 30,000 CUNY academic workers – gathered with student leaders in the Bronx, home to three underfunded CUNY colleges and tens of thousands of CUNY students, to call on Governor Hochul to increase state funding for CUNY by $428 million. They also called on City leaders to reject the Mayor’s planned mid-year cuts to CUNY community colleges, including Hostos and Bronx Community Colleges.

“CUNY needs increased investments from both the State and the City to strengthen our workforce and put right years of chronic underfunding of working-class communities and communities of color and the institutions that educate them,” said James Davis, President of the Professional Staff Congress. “We cannot allow disruptive mid-year city cuts that deprive colleges of the faculty and staff that support a quality education.”

Last year, the Governor announced a five-year $1.5 billion plan of reinvestment in the state’s two public university systems, CUNY and SUNY. The union and students are urging her to accelerate and expand her reinvestment plan for CUNY by increasing State senior college funding by $350 million and State funding for community colleges by $78M in her next Executive Budget.

The Mayor has already cut CUNY’s city funding for this year by 3% ($14.6 million) in the budget deal he struck with the City Council. In November he proposed an additional 3% ($13.7 million) mid-year cut as part of his “Program to Eliminate the Gap” plan to cut most city agencies. The union and students are calling on the City Council to reject the mayor’s cuts.

The Governor’s last budget led to the hiring of 475 new full-time lecturers and 120 new professors to bolster CUNY’s long depleted faculty. The Mayor’s enacted and proposed cuts will leave CUNY unable to fill 226 empty faculty and staff positions at the community colleges.

“What you see behind me are dedicated faculty who create pathways for all of our students. We need to make sure that there is investment in CUNY. When you invest in CUNY you are investing in the next generation of leaders,” said Vanessa Gibson, Bronx Borough President.

The Bronx is home to three underfunded CUNY colleges–Bronx Community College, Hostos Community College and Lehman College. More than 30,000 CUNY students and almost 2,000 CUNY faculty and professional staff live in the borough. At Hostos Community College, the shuttering of the cafeteria has made it difficult for students to get affordable, nutritious food and the IT department is so understaffed that students were not informed about timing for finals until just this week. At Bronx Community College, broken heating systems could not handle dropping temperatures and forced the administration to move classes to remote learning the week before Thanksgiving. And at Lehman College, less than 40% of undergraduate instruction is provided by full-time faculty; the majority of classes are taught by underpaid adjunct faculty hired on short-term appointments.

“We need more resources. To enable a student-teacher ratio that allows us the one-on-one contact our students need to thrive. To hire more full-time counselors as students navigate the twin perils of a pandemic that is not yet over and a skyrocketing cost of living. And to fulfill the promise of affordable higher education in New York,” said Craig Bernardini, English Professor and Professional Staff Congress chapter chair at Hostos Community College.

“The state must invest in CUNY and SUNY as a matter of educational equity. Building on the progress made last year, we are here today to call for renewed investment because students still struggle to find help from advisers, or to pay for tuition, textbooks, childcare, or meals. The work is far from over to meet the financial needs of New York’s students, faculty, staff, and institutions,” said Ayesha Schmitt, NYPIRG Higher Education Coordinator.

Speakers talked about the difference CUNY makes for individual lives and for the city and state. CUNY graduates contribute $4.2 billion annually to the state economy and make up about half of all new nurses and one third of all new teachers each year in New York City.

“One million young people invest in our public education system every year. That one million is our economic backbone. The state must bear the responsibility of funding their education,” said Noshin Hoque, Policy Coordinator, Young Invincibles.

With their collective bargaining agreement with CUNY expiring at the end of February, PSC is also preparing for a contract campaign fight amid record-high inflation and forecasts of a recession, a daunting context for salary negotiations. But nationwide, labor organizing for fair contracts in higher education has reached a fever pitch. Since November 14, 48,000 academic workers across the University of California system are on strike in the largest labor action of the year. And at The New School in New York City, adjunct faculty have been on strike since November 16.

Thursday’s rally and press conference are part of PSC’s Union Week, a citywide organizing effort to demand funding to support a New Deal for CUNY and a fair union contract. Other actions included dozens of union members testifying at Monday’s CUNY Board of Trustees hearing to discuss their upcoming budget request to the City and State, union members wearing #Red4HigherEd, and local mobilizations at campuses across the city. 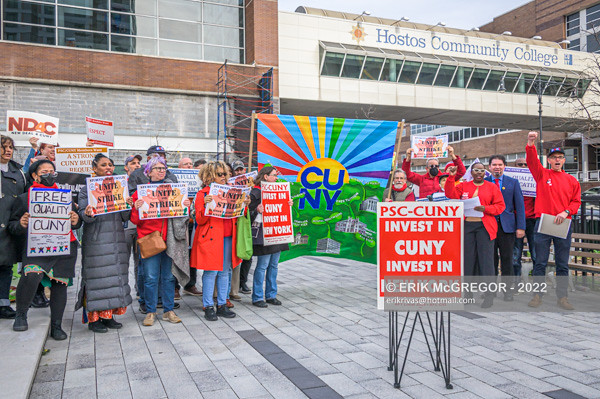