We are honoring Leslie for her role as the overall organizing coordinator of that historic event and for her lifetime of activism. As an out lesbian, Leslie was among the first generation who did disarmament work as an open member of the LGBTQ community. Today LGBTQ disarmament activists are not only core participants but lead the movement in framing the issue around the idea that the oppression of women, minorities and the LGBTQ community is central to the male supremacy that has fed the creation of a militarized world whose grotesque apex is nuclear weapons.

As we approach the 40th anniversary of the June 12, 1982 March for Disarmament and Human Needs that brought over 1 million people to Central Park and the streets of Manhattan, the New York Campaign to Abolish Nuclear Weapons (NYCAN) will be honoring Leslie Cagan for her central organizing role and for her lifetime of activism.

In 2019, Leslie testified at a hearing at New York City Council that led to the passage of two pieces of nuclear disarmament legislation – reaffirming New York City as a Nuclear Free Zone, instructing the Comptroller to divest NYC’s pensions and finances from nuclear weapons production, calling on the federal government to sign and ratify the historic 2017 Treaty on the Prohibition of Nuclear Weapons and setting up a committee to see that this work is done.

To that end we will be celebrating Leslie with an action, calling on Speaker Adrienne Adams and Mayor Eric Adams to enact former Council Member Danny Dromm’s nuclear disarmament legislation in the most effective and powerful way possible. Let’s use this opportunity to get to know one another and to strengthen our interrelated communities.

“We must remember that throughout most of human history there had been no nuclear weapons. If we can make them, we can get rid of them.” Leslie Cagan. 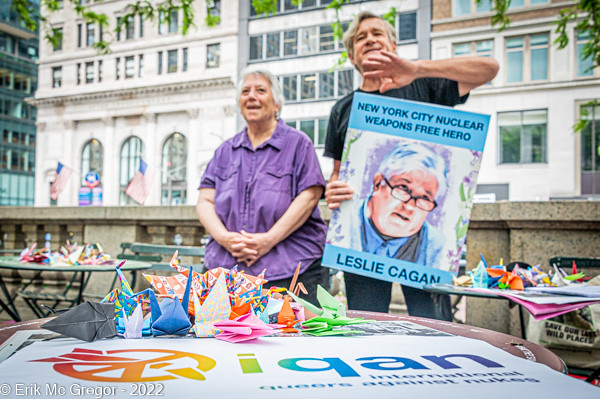