New York, NY – Thousands of New Yorkers took to the streets of Manhattan on June 27, 2021 to participate on the Reclaim Pride Coalition’s third annual Queer Liberation March, where no police, politicians or corporations were allowed to participate.

The Queer Liberation March return this event to the people, celebrating our victories and recommitting to fight our current battles.

“We need to march like we used to, when the diverse LGBTQIA2S+ communities gathered every year as one people, in peaceful, protest marches,” said Paul Nocera, an RPC organizer. “Our communities are still reeling from the COVID pandemic and the resulting shutdown of support services and community spaces. It’s times like this that we need to March — instead of supporting a corporate takeover dressed up like a parade.”

The Queer Liberation March welcomes all people, tens of thousands from New York, the United States, and overseas.

The third annual Queer Liberation March began at Bryant Park, marching west along West 41st Street to 7th Avenue, and then down 7th Avenue to Sheridan Square and the Stonewall National Monument, then east along West 4th Street to Washington Square Park to disperse in community.

Dozens of community members, including on foot and on bicycle, will serve as safety marshals for the March, as an example of the ways that “WE KEEP US SAFE.”

Communities exercising their own agency, in an attempt to reduce the risk of harm is both a principle and activity that has received increased focus by grassroots organizations as mutual aid efforts have sprouted up across the city and the nation in the wake of the pandemic.

RPC volunteers have worked for months to ensure that the event can occur without the need or involvement of police.

No corporations, politicians nor police were allowed to participate in the Queer Liberation March. 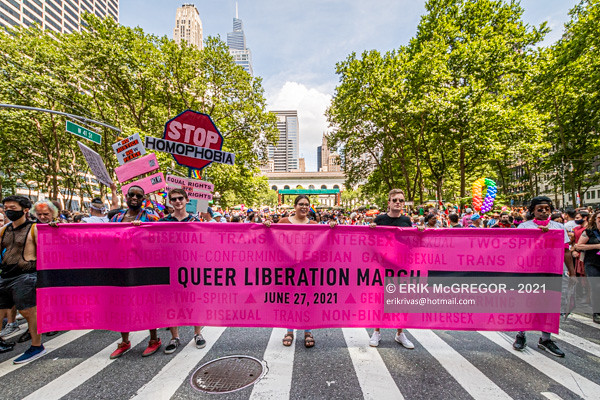