Brooklyn, NY – Members of New York-based grassroots organizations Rise and Resist, Indivisible Nation BK, Empire State Indivisible, Common Cause New York, Sunrise Movement NYC, Generator Collective and Ilana Glazer, PCM-NY, Housing Works and others held a 24 hour filibuster to end the filibuster outside Chuck Schumer’s Park Slope residence on May 7, 2021 to urge him to use all the tools he has as Majority Leader to unite his caucus and end the filibuster.

Dozens of groups from all over the city will “hold the floor” over the 24 hours. Their demand: that Senator Schumer as Senate Majority Leader use every tool at his disposal to unite his caucus to end the filibuster. As he says, “Failure is not an option.”

Activists will read from democracy-centric texts ranging from the Constitution and the Bill of Rights to recent Presidential Inaugural poems and even sing the First Amendment. Statements from grassroots groups in West Virginia and Arizona, who are livestreaming the event to their members, will also be read. At 1:00 p.m. on Friday, Ilana Glazer and the Generator Collective will join the action.

“The filibuster is standing in the way of legislation to address gun violence, police violence, climate change and voter suppression. People’s lives are literally on the line,” said Livvie Mann of Rise and Resist. “We need Chuck to lead and end the filibuster now. “

“Democrats made the For the People Act HR1/S1 for a reason: If we don’t fix our democracy now, we’ll end up with another Trump in office– and soon,” said Liat Olenick of Indivisible Nation BK. “Chuck Schumer needs to do his job as Majority Leader and get his entire caucus in line to support ending the filibuster so we can pass this legislation and safeguard our democracy.” 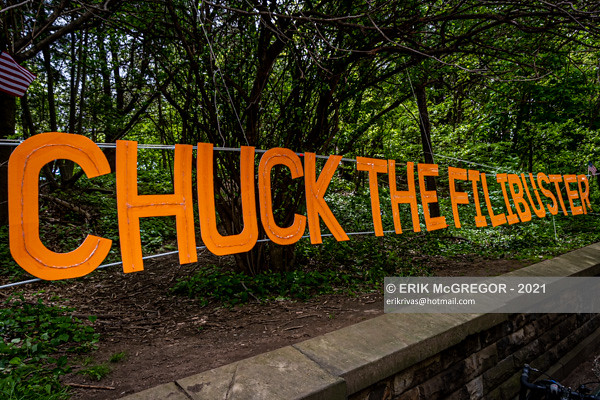