New York, NY – Members of the Workers Assembly Against Racism gathered on February 20, 2021 across from Jeff Bezos-owned Whole Foods Market in Union Square South for a nation-wide solidarity event with the unionizing Amazon workers in Bessemer, Alabama.

The Southern Workers Assembly has issued a call for a National Day of Solidarity with Alabama Amazon Workers on Saturday, February 20. Actions are being planned across the South and the U.S. on that day at Amazon facilities (warehouses, distribution centers, Whole Foods, etc.).

Between Feb 8, and March 29, approximately 6,000 Amazon warehouse workers in Bessemer, Alabama will begin voting by mail on whether to be represented by the Retail, Wholesale Department Store Workers Union (RWDSU). The harsh working conditions at Amazon warehouses, along with Amazon’s refusal to adopt measures that protect workers from COVID 19, have pushed Amazon and Whole Foods workers every- where to step up organizing and fighting back.

These predominantly Black workers who have in recent months formed the BAmazon Workers Union, are on the cusp of launching a history-changing workers organization against one of the biggest and most powerful transnational corporations in the world, and its super rich union busting owner, Jeff Bezos. In addition, these workers are standing up to the racist, anti-union laws that suppress labor across the South.

Solidarity from every corner of the labor and progressive movements is needed now to show the workers in Bessemer that they are not alone, that all eyes are on the historic struggle that they are leading. This is especially needed as Amazon ramps up their union-busting tactics.

Workers Assembly Against Racism stands in full support of the BAmazon Union drive. For too long, Amazon warehouse workers have suffered oppressive working conditions. Amazon bosses have seen their wallets grow larger than ever in the pandemic, meanwhile, their most vulnerable workers experience workplace injuries and fatalities at alarming rates.

As an organization conscious of the twisted inner workings of racial capitalism, we cannot help but notice how the surveillance technologies employed by Amazon, which punish workers for rest and bathroom breaks, echo the violence of mass surveillance which the state employs against Black people.

The historic Black-women-led organization efforts for Amazon’s first US union in Bessemer is a signal of hope for workers all over the world. Join us outside of the Whole Foods at Union Square on February 20th, the national day of solidarity with the union. Together, we will defeat Amazon’s union busting cadre and win the fight for Amazon workers’ rights everywhere! 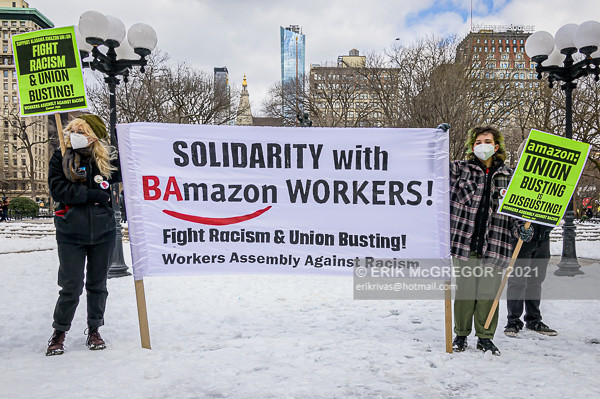