Rockaway Beach, NY – New York-based members of Nobel Laureate ICAN, the International Campaign to Abolish Nuclear Weapons gathered at Rockaway Beach in Queens on January 1, 2021 to take a New Year’s Polar Bear Plunge for local disarmament legislation, urging New York City Council to align itself with the Treaty on the Prohibition of Nuclear Weapons which becomes international law on January 22.

Not far from where nuclear weapons were once deployed near Fort Tilden Park, NYC based members of 2017 Nobel Peace Laureate ICAN plunged into the Atlantic Ocean at Far Rockaway to urge City Council to bring two pieces of nuclear disarmament legislation to the floor for a vote. NYCAN, the New York Campaign to Abolish Nuclear Weapons, together with Council Members Dromm, Kallos and Rosenthal have successfully garnered a veto-proof super majority for RES 976-2019 and INT 1621-2019. Both pieces of legislation have been sitting on Council Speaker Corey Johnson’s desk for 11 months.

RES 976 calls upon the Comptroller to instruct the pension funds of public employees in New York City to divest from and avoid any financial exposure to companies involved in the production and maintenance of nuclear weapons, reaffirming New York City as a Nuclear Weapons Free Zone and supporting the Treaty on the Prohibition of Nuclear Weapons by calling on the US Government to sign and ratify the Treaty. INT 1621 Bill will create a New York City Nuclear Disarmament and Nuclear Weapons Free Zone Advisory Committee to “conduct a comprehensive review of New York City’s current stance on nuclear weapons,” submitting an annual report for five years including “findings and conclusions and any recommendations for policy or legislation.” The Committee can also “host discussions, public programs and other educational initiatives.”

NYCAN is calling on the Council Speaker to bring the legislation to a vote before January 22, 2021 when The Treaty on the Prohibition of Nuclear Weapons enters into force and nuclear weapons are categorically outlawed by international law. To call attention to our demands we will pose with banners, posters and colorful accessories.

Robert Croonquist, NYC pension holder and NYCAN member said “On 28 January 2020 more than 60 citizens appeared in person at City Hall to testify on behalf of CM Dromm’s progressive legislation. The hearing generated some 400 pages of testimony and further evidence in support of nuclear abolition. We had fully expected for the legislation to be brought to the council floor for a vote but not long after our successful hearing, the pandemic took hold and the world changed.”

And as with health experts who warned it was not IF but WHEN the next pandemic would hit, most experts agree that unless we act nuclear weapons will be used by accident or by design. The Bulletin of the Atomic Scientists has set their Doomsday Clock at 100 seconds to midnight, the closest it has ever been to nuclear catastrophe in the 75 years of the nuclear age. Dr. Rachel Bronson, President of the Bulletin said, “The current environment is profoundly unstable and urgent action and immediate engagement is required by all.”

Where the small group has decided to carry the polar bear plunge holds remarkable significance that few New Yorkers will recall. Dr. Matthew Bolton of Pace University said “Nike Ajax missiles were based at Fort Tilden in the 1950s, later replaced in 1959 by Nike Hercules anti-ballistic missiles, with warheads of 3, 20 or 30 kilotons. For comparison the yield of the atomic bomb that levelled Hiroshima was 15 kilotons. It is hard to imagine that weapons of such indescribable violence would be deployed right next to the public beaches.”

Dr. Emily Welty, a Rockaway Beach resident and Director of Peace and Justice Studies at Pace University emphasizes the importance of citizen awareness and action. “New York used have nuclear weapons bases surrounding the City and its Harbor, but thanks to civic action by activists and City officials in the 1980s and 1990s, NYC’s territory and waters are nuclear-free! Ocean-lovers were at the forefront of resisting the installation of a nuclear-capable base in Staten Island. The Navy appears to have honored the City’s Nuclear Weapons Free Zone, including during Fleet Weeks. It is crucial that the legislation currently stalled in the Council Speaker’s office come to the floor for a vote.”

We demand that our resources be used for human needs and environmental protection. We reject the proposal that more than one trillion tax dollars are currently proposed over the next ten years for nuclear weapon development. We must respond to the frightening legacy of the Trump Administration that has destroyed modest nuclear arms control agreements that have been in place over decades, and has threatened to break the taboo against nuclear testing.

Brendan Fay, 62 founder of St. Pat’s For All and NYCAN member said, “Today we are Polar Bears for Peace. This Jan 1, 2021 wearing our masks we plunge the freezing ocean at Rockaway. We join this exuberant New Year’s ritual to celebrate life, health and hope. As disarmament activists, for the sake of children, their future and love of earth we are determined to make our world free of nuclear weapons. Besides, this is the inspiring legacy of generations of New Yorkers like Dorothy Day, Bayard Rustin and Mayor David Dinkins.” Fay said, “As we begin a new year, a new era of hope, with the pending legislation the City Council can send a message that New Yorkers are clear – no to nukes and yes to health care.”

As we transition to Democratic leadership in Washington, the Biden-Harris Administration must understand that New Yorkers do not support nuclear weapons use or threat of use and that we urgently need to redirect federal funds to mitigate COVID 19, climate chaos, systemic racism, and support healthcare, housing, education and social and ecological justice. 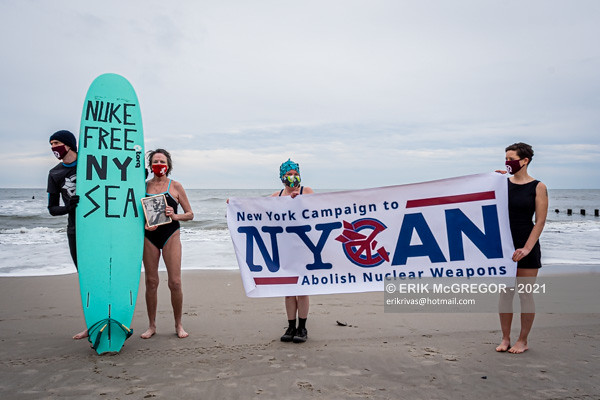