New York, NY – A number of nonprofit and grassroots organizations, indigenous leaders from Brazil and beyond, including APIB (the Alliance of Indigenous Peoples of Brazil), climate justice and political activists groups from the #CancelBolsonaro coalition, including the Defend Democracy in Brazil Committee NY, Reverend Billy & The Stop Shopping Choir, Extinction Rebellion NYC, Rise and Resist, and allies Party for Socialism and Liberation – NY, Seeding Sovereignty,, performance artists, environmental and indigenous rights organizations, including Greenpeace, Amazon Watch, the Rainforest Foundation and more hosted a demonstration on March 10, 2020 in protest of a meeting between the Minister and JPMorgan Chase, a major financier of Amazon deforestation.

The protesters denounced policies that Minister of Environment Ricardo Salles is trying to enact under the guise of “development”, but which in turn is causing the destruction of the environment and of communities that subsist from and protect the Forests, such as the indigenous and quilombola (traditional black communities).

Salles is in New York meeting with JP Morgan Chase, amongst other investors. JP Morgan Chase is considered one of the Dirty Dozen companies driving deforestation in the Amazon rainforest, according to an Amazon Watch report.

The demonstration had energized chants by the Stop Shopping choir referring to Brazil’s current President, who is responsible for a roll back on environmental and human rights policies, calling for “Bolsonaro (to ) go away”; and chants thanking the Indigenous Guardians of the Forest for protecting our natural resources.

Members of Defend Democracy in Brazil, Natalia and Adriana, spoke of the solidarity to the communities directly affected by these dirty deals, and asked the local NY community passing by, to boycott these corporations, to protect our future. 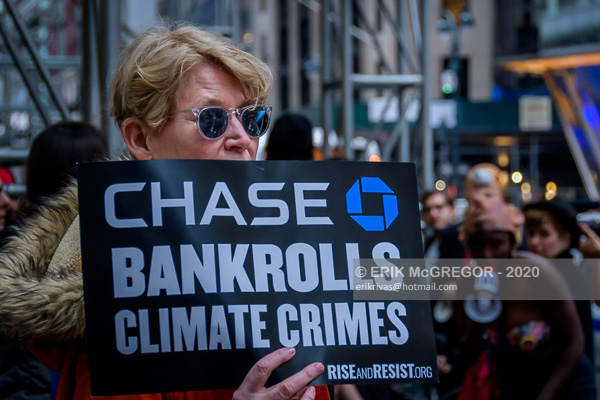